BOOKS WITH OR ABOUT THADDEUS LOWE - 2005 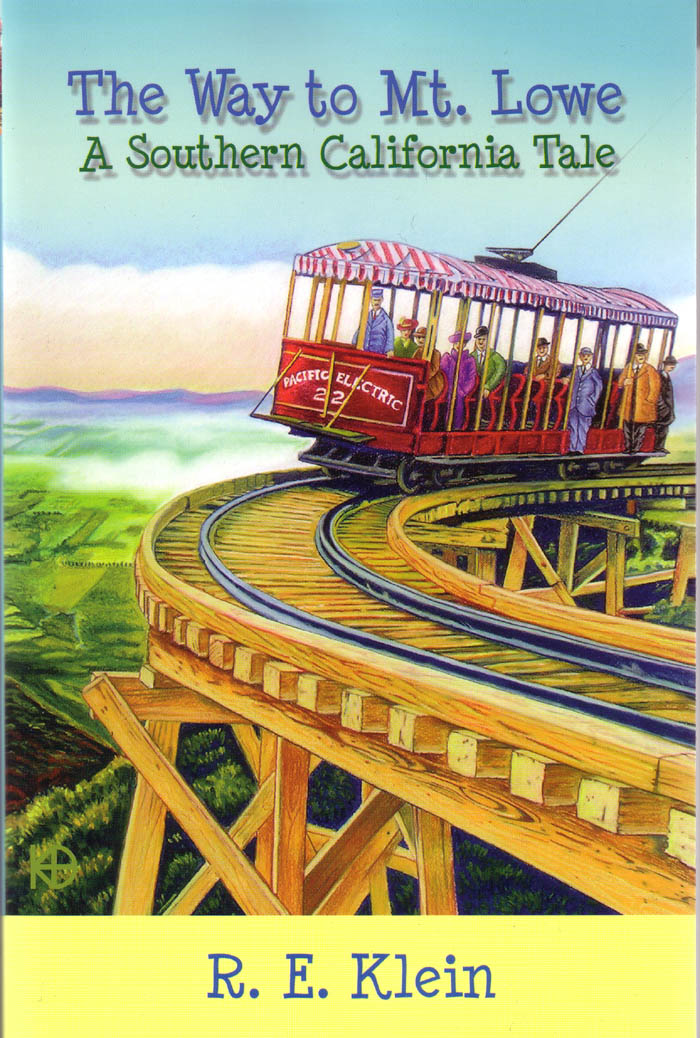 The Way to Mt. Lowe - A Southern California Tale by R. E. Klein

I first met the Meaning of My Life while watching dynamite kick smoke from a mountain, escorted by a crack that rattled trees. "A railroad to the sky, Son." Pa adjusted his derby hat. "That's what they're blasting up there." I was ten at the time. From where we stood outside Uncle Simeon's dry goods store on Fair Oaks Street in Pasadena, we had a good view of the Sierra Madre Mountains hanging just above us - my father, Benjamin Bright; my uncle Simeon Bright; and me, Lyman Bright. Around us rose the shiniest buildings you could imagine. Everything smelled wholesomely of fresh paint.

More fragments spotted the sky, followed by the bang of dynamite. My father put his arms on my shoulders. "What do you think, Lyman? Want to ride to the sky?" I nodded. I couldn't picture it. But it didn't matter. It sounded gorgeous and energetic and impossible.

It was June 1892, practically the summit of the century. My uncle Simeon had invited us to put up awhile at his home in Pasadena, California - my father, mother, two brothers, two sisters and I - we having arrived the week before from Indiana on the reduced rail fares the train company offered.

Pasadena exploded with peaches, oranges, grapes, lemons - whatever bent branch or shook soil. Pa called Pasadena Eden and the Promised Land and Heaven in one skin, with a climate that cures all. But no matter what you said, it wasn't enough. No wonder they had a land boom. And you found no strangers here. Pasadena claimed a population of over twenty-five hundred, mostly from Indiana, so everyone was friends. To the north, between Pasadena and the mountains, rose the slopes of Altadena - a wasteland of wild poppies; according to Uncle Simeon, useful for nothing but picking flowers.

"Watch out, below," pronounced Uncle Simeon as one more detonation shook the mountain.

Uncle Simeon had settled in three years earlier, at the tail end of a Hoosier invasion way back in the 1870's after one of their advanced scouts proclaimed that spending a day in Pasadena cured his asthma. Uncle Simeon stood taller than Pa, and was fat where Pa was thin, and bald where Pa had hair; but you couldn't see much of Uncle Simeon's fatness for the ample vests he wore, nor the baldness beneath the derby had he always had on.

My father patted my shoulder. "Look around you, Lyman. You see Southern California, different from any place in the world."

Uncle Simeon shook his head. "The place doesn't matter, Ben. It's the people, not the place. The people make the place what it is."

"You cannot deny there is something rare here," my father insisted.

"The people make the place, Ben."

That's when I first met the Meaning of My Life. As my father and uncle disputed beneath the exploding mountain, I had that feel of eternity when everything familiar becomes uncannily supercharged with meaning. Gazing at that mountain, I quivered with an eternal ache, a longing for some shattering truth burning to reveal itself. Another explosion brought an end to this, and I was a boy again, idling with his father and uncle, that hot June afternoon of 1892 on the busy streets of Pasadena.

Pa turned to his brother.

"Simeon, what's the name of the fella who's building this railroad to the skies?"

Another concussion shook the mountain.