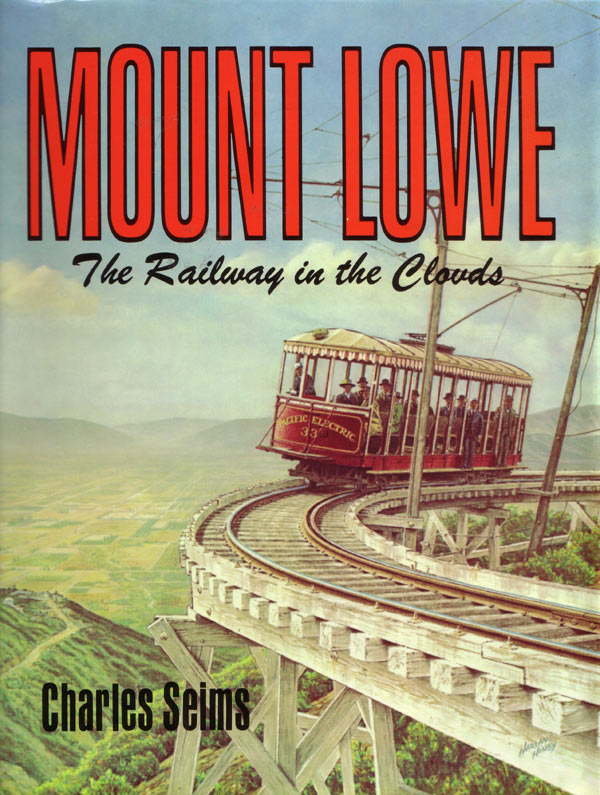 Mount Lowe - The Railway in the Clouds by Charles Seims

Southern California's Mount Lowe Railway, for nearly 40 years, lived up to its title "The Most Scenic Mountain Railway in the World." Its short trackage from Altadena to Alpine Tavern, rising over 3,130 feet in only 5.84 miles, constituted an engineering marvel in the midst of scenic grandeur, to which the story of its construction and operation lent color and interest.

In 1888, Professor Thaddeus S.C. Lowe, inventor and financier, famous for bringing about the use of observation balloons by the Union Army in the Civil War, came to Southern California to retire. Lured by the mild climate, he settled in Pasadena at the foot of the rugged San Gabriels. The majestic mountains proved more challenging than restful, and it was not long before Lowe was moving rapidly toward another goal.

The idea of building an alpine railway into the San Gabriels was not a new one; but its translation into reality rested finally upon the coupling of Lowe's imagination and drive with the brilliant engineering ability of David J. Macpherson. It was Macpherson who finally surveyed a practicable route and so strongly convinced Lowe of its feasibility that the latter formed the Pasadena & Mount Wilson Railway for the purpose of constructing a line to the top of Mount Wilson. When their attempts to acquire a right-of-way to the summit of Mount Wilson were thwarted, Lowe and Macpherson, undeterred chose to build to the crest of Echo Mountain.

Mount Lowe - The Railway in the Clouds chronicles the result of their efforts, the Mount Lowe Railway, from the time of its original construction through the years in which it functioned as an integral part of the Pacific Electric system. This is a moving story of a man's relentless struggle to keep expanding his mountain empire in the face of increasing debt and devastating destruction by the elements, and of his ultimate separation from the enterprise - which went on without him.

To read it is to realize the problems involved in building the narrow-gauge electric line from Altadena into Rubio Canyon, in designing and constructing "The Great Cable Incline" on a 62-percent grade, the life and times of "Echo Mountain House" and the "Chalet" on Echo Mountain, and in surveying and building the extension to Crystal Springs, the site of Alpine Tavern. One travels in wonderment on a spectacular tour of the Alpine Division, as the track follows the natural contours of the mountainside over 18 trestles and around 127 curves to its destination at the Tavern.

Henry E. Huntington and the Pacific Electric presided over this remarkable enterprise for more than half its lifetime, and in those days, too, its billing as "The Greatest Mountain Trolley Trip in the World" was justified. In 1936, however, when the Alpine Tavern burned to the ground, the Mount Lowe story came to an end.

In this volume, the author, skillfully blending text and film, has overlaid the past upon the present, recreating the people, the Observatory, the great searchlight, fire and flood, and other events that once enlivened a now silent landscape. Mount Lowe - The Railway in the Clouds is a book not only for railroad buffs and lovers of mountain trails, but for all who cherish a knowledge of - or would like to learn more about - the historical transition of Southern California.