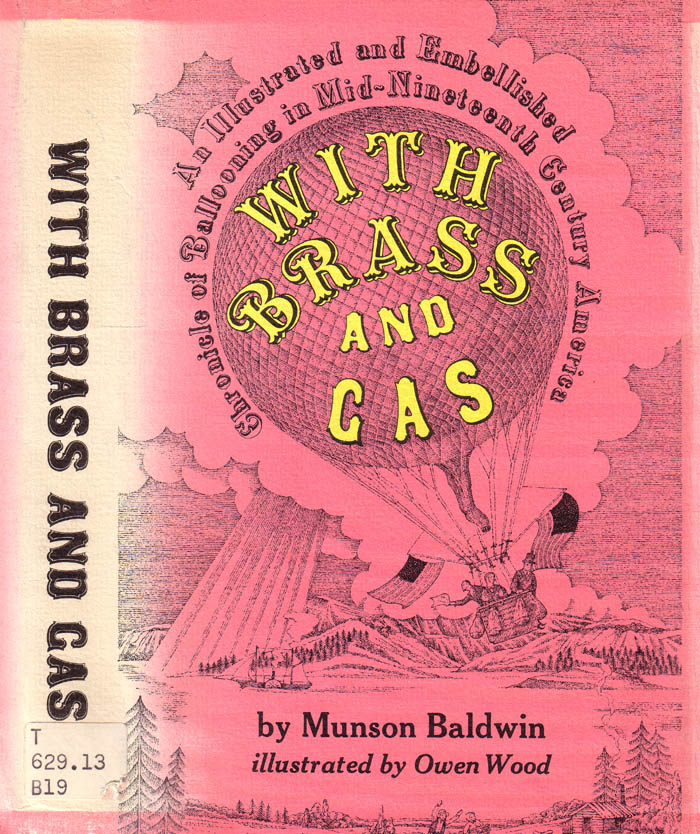 With Brass and Gas by Munson Baldwin

"There are two ways of landing a balloon. If there is very little wind, you can valve right down .... If there is a fair wind blowing, it is best to valve down slowly to below 25 feet, and then rip .... the grappling hook can be dropped before ripping."

There are two ways of dealing with aeronauts; the first is to invite them to dinner and offer them beds for the night; the other is to make an extortionate claim for damages and carry them before the magistrates as trespassers. The latter practice is much in vogue in rustic regions."

Thus spake a brash breed of Americans in the 1850's - men who believed the balloon was the vehicle which would accomplish man's age-old dream of extraterrestrial locomotion. With Brass and Gas recaptures the voices and the spirit of this lost era - in the tragic-comic accounts of the balloonists themselves, the speculations of the press, and the outraged shouts of startled farmers whose cattle and children had been scattered by the descending gas bags.

Munson Baldwin's skill in blending these voices into a true chronicle of ballooning's finest hours - and Wood's delightful drawings - bring back to life an almost forgotten yesterday. For here is America caught up in an adventure not too dissimilar from that of the modern astronauts. Yet to the adventurers themselves, it was indeed a far different experience: "We saw chubby boys watching us, blubbering as if they were mad. Some men, more determined than the rest, fired off guns at us. I saw several mammas, pointing us out to stubborn babies, with an attitude which seemed to say that our balloon was Old Bogey. Other women raised their hands against us, and at their signal, many others ran away, making the sign of the cross."

The contrast with the ticker-tape and presidential citations which greet today's descending aerial explorers is a telling measure of America's vanished innocence. Yet in that innocence, Baldwin finds many a tale still capable of quenching the modern reader's thirst for excitement.

For Munson Baldwin, ballooning is no academic subject. A California researcher, he is actively involved in the growing twentieth-century revival of ballooning as a sport.