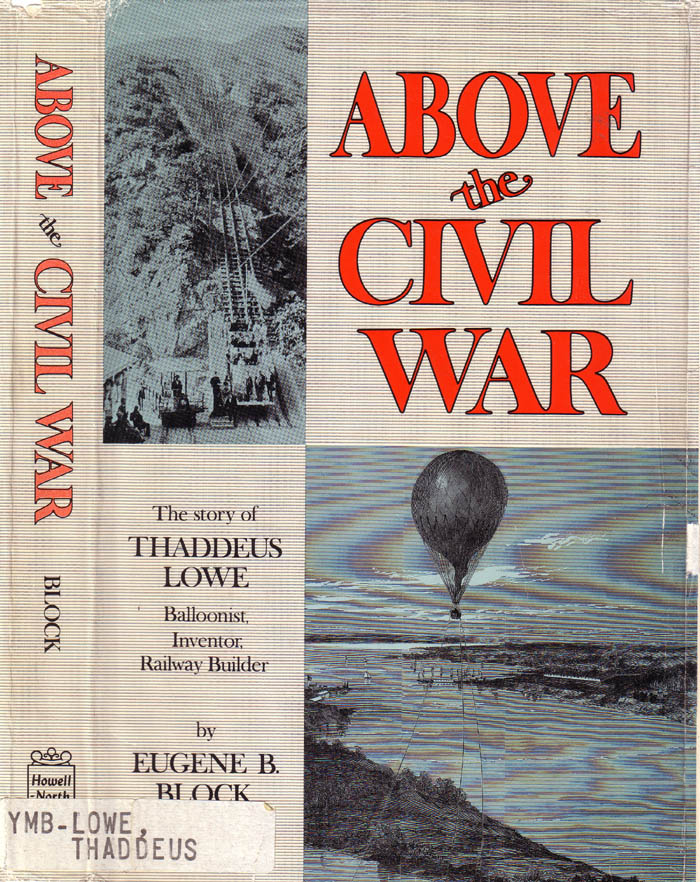 Above the Civil War by Eugene B. Block

Thaddeus Lowe was a man of that breed whose courage and vision sparked America's tremendous progress and growth during the 19th century.

Fascinated by the mysterious region of the upper air, he built increasingly larger and finer balloons until he had one large enough to span the Atlantic. Then came Civil War.

Professor Lowe volunteered his services to President Lincoln and was engaged as Chief Balloonist for the Union Army to organize the first United States military aeronautic unit, the Balloon Corps. For its use he invented portable gas generators, boats from which balloons might ascend, communications systems, and a system of lighting safe to use flammable gases.

After the war Lowe devised a way of making artificial ice and built a pioneer refrigerated ship. He made improvements in the manufacture and use of illuminating gas. Soon he was able to retire to Pasadena, California, at the foot of the Sierra Madre.

Challenged by the rugged mountains, he devised and built a railway from Altadena to a mountain, nearly a mile above sea level, that was soon named Mount Lowe. For forty years Southern Californians enjoyed riding the trolly to Rubio Canyon, the Great Cable Incline to Echo Mountain, and the narrow gauge trolley to Ye Alpine Tavern at Mount Lowe Springs.

Illustrated by sixty pages of fascinating pictures, the story of this many-faceted man offers good reading for all.