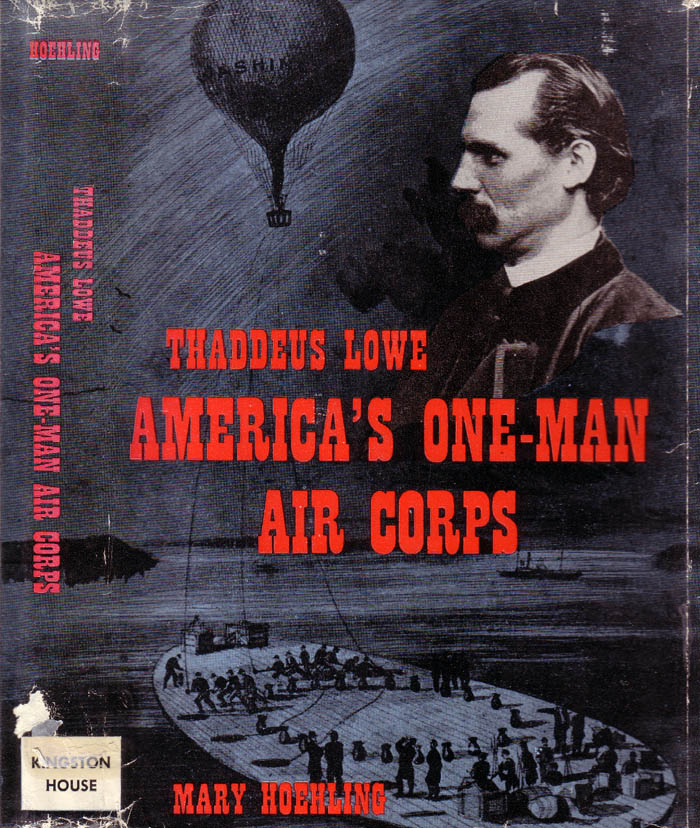 Flamboyant showman, starry-eyed dreamer, dedicated scientist, Thaddeus Lowe with his billowing balloon can justly be called the Founding Father of the United States Air Force, because of the balloon equipment and aerial reconnaissance techniques he developed during the Civil War.

A self-taught cobbler's son from New Hampshire, Lowe was interested in the science of flight and one of his boyhood experiments was a plan to send a huge kite aloft with a cat in it to test its reaction to altitude. He became fascinated by balloons and at twenty-two was a carnival balloonist taking passengers aloft at so much a head. A student of wind currents and gases, he made elaborate plans to fly a balloon across the Atlantic and was making a test over land, coming down for fuel in South Carolina, just as the Civil War broke out. Because of his very apparent Yankee accent and his strange paraphernalia, he was nearly hanged on the spot as a spy.

He offered his services to the Union Army and despite the skepticism of the generals about military balloons, Lowe gave a demonstration for President Lincoln. He even went so far as to relay the first message by telegraph from aloft. Lincoln was so excited about the balloon that he had its base installed on the White House lawn.

In August of 1861 Lowe received the go-ahead to construct the first official military balloon for the U.S. Army. Four weeks later the Eagle became the first aircraft in history specifically designed for war. For two years Thaddeus Lowe's balloons directed artillery, reported troop movements, revolutionized the science of gunnery through aerial reports. He trained other balloonists, too, showing them how to penetrate camouflage, estimate enemy strength by the dust of moving columns.

But ill-luck struck when the Rebels were victorious at Chancellorsville, despite Lowe's accurate dispatches from his balloon perch. Discouraged by lack of recognition and sickened by the whole-sale slaughter, the "most shot at man" in the Civil War returned to his research and inventions, among them an artificial ice machine - the first form of refrigeration, an incandescent gas mantle, a coke oven, a water gas system. He built an observatory with a 16-inch telescope on what later became Mount Lowe. He planned to build a Planet Airship which would circle the globe in thirty days and be capable of exploration of the polar regions. When he died in 1913, at the age of 81, Thaddeus Lowe was at work on a giant telescope, still seeking further understanding of the universal heavens.