The curtain opens to our paper play, presenting to you yet another scene, an all but obscure segment, in the life and times of our Scenic Mt. Lowe Railroad. Our star in this play is the Pasadena Grand Opera House and leading character is Thaddeus Sobieski Coulincourt Lowe. This is just another chapter in the life of a diverse individual of vision few Pasadeneans are even aware of.

The Grand Opera House, conceived in the boom years of the 1880's, was supported greatly by local residents in dire want of a better cultural life more fitting with their social and artistic standing. 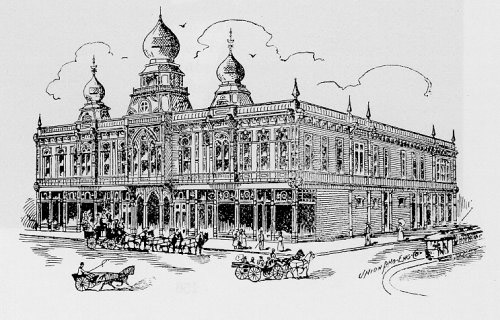 The Grand Opera House Company was formed on 3/21/1887 by E. C. Webster, Senator L. J. Rose, F. M. Ward, and Roscoe Thomas. A prime motive the corporation had for building the opera house was their interest in developing lands on South Raymond Ave. A site was settled on at the Southwest corner of Bellview Dr. And Raymond Ave. By June of the same year the ground was being graded and the three feet thick cement foundations being laid.

Lean times came to be in 1888 and despite a certain amount of trouble between the owners and contractors, mostly about money and availability of materials, the building neared completion. The Board of Trade pamphlet of 1888 said "Among the finest of new buildings that attract attention is an opera house which is now nearly completed." In fact of the two million dollars spent that year on building improvements in the city, the Grand Opera House was the largest single expenditure coming in at over $125,000.

Finally, on February 13, 1889, with the whole town buzzing with expectancy, the Grand Opera House held its first performance. Perhaps the best performance that night was the house itself, for the majestic building was the epitome of elegance.

The building was done in Moorish architecture, a style popular if the times. Ornately decorated with bronze and guilt, the opera house offered beauty rarely seen before. The very best of carpenters, artisans, and mechanical specialists were brought in to spare no expense in providing Pasadena with a world class opera house.

Seating capacity was 1500 of which 900 seats were on the main floor and 600 were in the balcony. The main floor seats were on tiers that raised 18 inches for each row affording all the best of views. The folding back chairs were not only cushioned but held hat and umbrella racks.

After being ushered to their seats the patrons feasted their eyes upon the luxurious drop curtain. The scene depicted was an inner courtyard of a Moorish palace, much like the Alhambra, complete with musicians playing tunes on a large carpet while a group of beautiful women watches one of their number dance. Before the chandeliers dim the frescos on the ceiling would catch the viewer's eye.

Finally the curtain opened on the first presentation of the opera house. The play was Myneer Jan, and according to critics of the day not even the thespian fairies would be able to save it. The largest and most fashionable audience ever assembled in Pasadena was about to witness a play that certainly was not befitting an opening night.

The leading character was a substitute and though pretty and graceful, she tripped in her musical lines. A little soubrette miss Clara Lane was so cruelly hoarse she made no attempt to sing hoping for sympathy from the audience. The choruses were in good form and the orchestra secured from Los Angeles made a good showing.

Although opening night was not the best performance wise, the house was indeed packed and this encouraged the managers of the opera house to secure the best theatrical entertainment in the country.

Before long they signed the very popular Madam Helena Modjeska who was undergoing contract disputes on the East coast. Shortly before agreeing to come to the Pasadena Grand Opera House she had signed a contract with a Philadelphia firm for 30 weeks at a salary of $35,000. 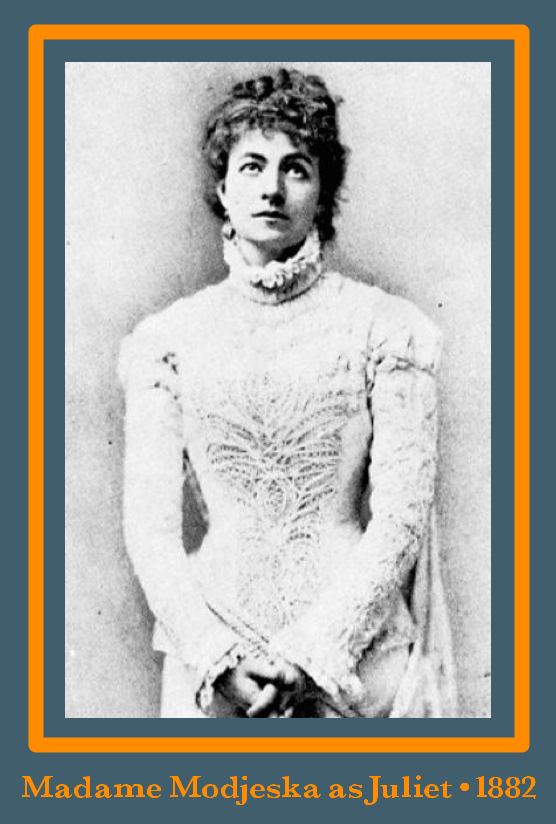 Madam Modjeska gave two sterling performances, Mary Stuart and Camille. Both were played to packed houses and the great actress was accorded grand ovations. Unfortunately for Pasadena these were probably the two last great performances at the opera house.

In the months to come scheduled performances were mediocre and soon audiences began to thin out. Los Angeles was providing better entertainment and theater trains were set up to transport locals into Los Angeles. Many stars requested guarantees before appearing at the Grand Opera House.

During 1890 the opera house steadily declined. Many thought it was because of being too far from the center of town. Others complained there was no heat causing uncomfortable situations for its patrons. Location, amenities, and plain old financial troubles caused the Opera House to be in a woeful condition by the end of 1890. The opera house was closed and bids were sought for its demolition and resale of the fixtures and furniture. By May of 1891 the Grand Opera House Company was bankrupt.

In the meantime our Professor Lowe, a many faceted man, was looking for an office building to house his various enterprises. He looked at the opera house as a business investment. It was quite suitable for storing and manufacturing many of the lighter class of goods used in connection with his fuels for illuminants. In addition it would provide suitable office space.

In mid 1891 Thaddeus Lowe successfully negotiated with Senator Rose and the Ward brothers for the purchase of the Grand Opera House at a greatly reduced bankruptcy price. He used his own money which really opened Pasadena's eyes to the things this individual was able to do. 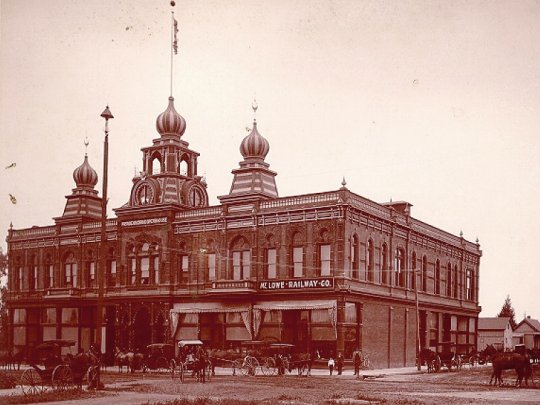 Pasadena Opera House during the 1890s

Quickly Lowe set out remodeling the Opera House to accommodate his various holdings. Engineer David Macpherson had offices up on the second floor and drafting rooms were set up for the mountain railway. Lowe had an office on the first floor and planned to sell tickets from it for his scenic railroad.

Much of the space was to be used for housing the various goods involved with Lowe's gas and electric patents. The Pasadena Gas and Electric Light Co. had its showroom at the Opera House displaying a large assortment of gas cooking and heating stoves, bath boiler heaters, gas fixtures, hotel ranges, large house and church heaters, confectioners' stoves, laundry appliances, waffle cookers, and nursery burners. A notice was also posted that gas engines were furnished for all purposes.

Lowe, in his remodeling plans added his Lowe System of gas heating to the opera house. Professor Lowe's son Thad Jr. was for years one of one of his fathers closest companions. Through those years he learned a great deal about the gas business and was made Secretary and General Manager of the gas portion of the business.

Thad Jr. also had a keen interest in dramatics and before long he was manager of the Opera House which his father kept in operation. Professor Lowe made sundry improvements to render the interior more attractive and more advantageous to having other events. He enlarged the stage and made a portable floor so that when it met the stage it provided a level floor over the entire room, so that it could be used for fairs, balls, and other similar entertainment.

Once again the Grand Opera House became for a short time a center of community pride. Community shows were put on starring local talent along with a wider variety of entertainment. Minstrel acts and vaudeville shows were put on along with pageants and even graduations. On occasion the hall also held lectures and hosted in the south hall societies such as Odd Fellows, Masons, and Knights of Pythias. 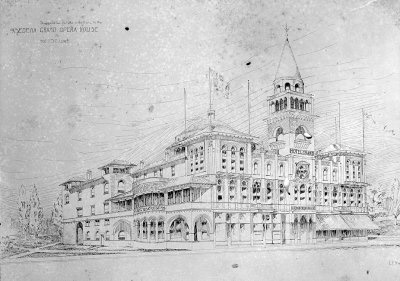 Architectural conception of the proposed hotel and opera house by L.F. Kwiatkowski

In September of 1897 the Professor contacted C. F. Bean about a loan of $15,000 to convert the Opera House to full hotel facilities, adding two stories allowing for over 300 rooms. Plans were drawn up by Pasadena architect L. F. Kwiatkowski but Lowe's Grand plan did not materialize.

Rough times were coming financially for the Professor. The scenic Mt Lowe railroad was taking much more money than expected and Lowe defaulted on the mortgage loan of his Orange Grove home and the Grand Opera House. The properties were foreclosed on and sold at auction.

In the coming years the property changed hands a number of times, later becoming the Auditorium with fine hotel and eating facilities.

By 1926 the grand old building known as the Grand Opera House had been razed and was eventually used by Royal Laundry as their factory and facilities.