Construction on the gigantic Echo Mountain House was begun during the spring of 1894 and was finished on November 24, 1894. 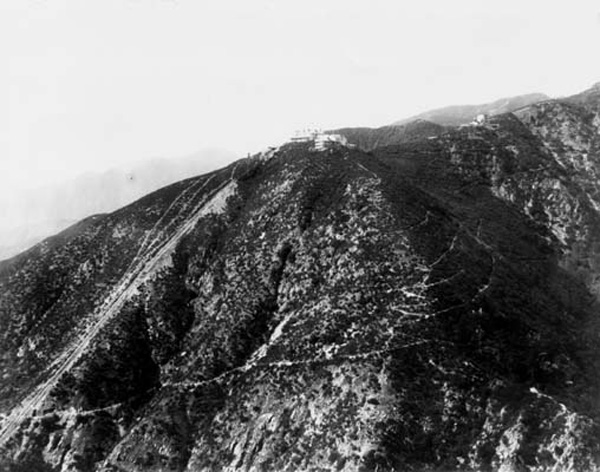 It was a beautiful building, four stories high, with a southern exposure over 400 feet long. A massive metal dome crowned the structure, and, as on all other buildings that the Professor owned, a huge flagpole rose still higher. Mount Lowe, The Railway in the Clouds, page 81. 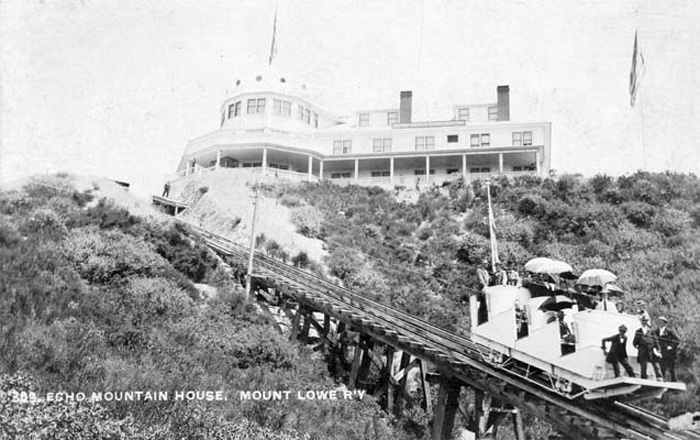 The entire inside of the hotel was finished in natural wood. There were 70 sleeping rooms, plus large areas devoted to office space and recreation. There was a 40 by 80 foot social hall, a dining room, souvenir shop, Western Union office, bowling alley, billiard room, barbershop and shoeshine stand. On the second floor was a spacious ladies' drawing room, in which no smoking was allowed. A huge concrete basement under the entire hotel was given over to storage and refrigeration lockers for the kitchen. Mount Lowe, The Railway in the Clouds, page 81, 83. 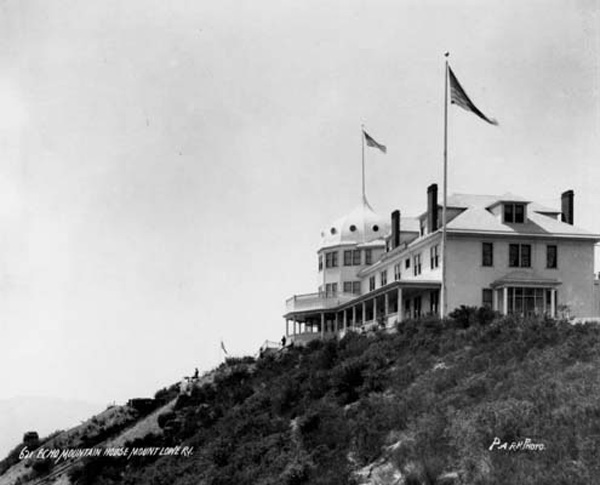 Like the Incline cars and all the buildings on Echo Mountain, the new hotel was painted a brilliant white. On a clear day, it was visible over an area of a hundred square miles, and the newspapers began to refer to the place as the "White City." At night, its hundreds of electric and gas lamps gave the appearance to those below of a castle in the sky. Mount Lowe, The Railway in the Clouds, page 83. 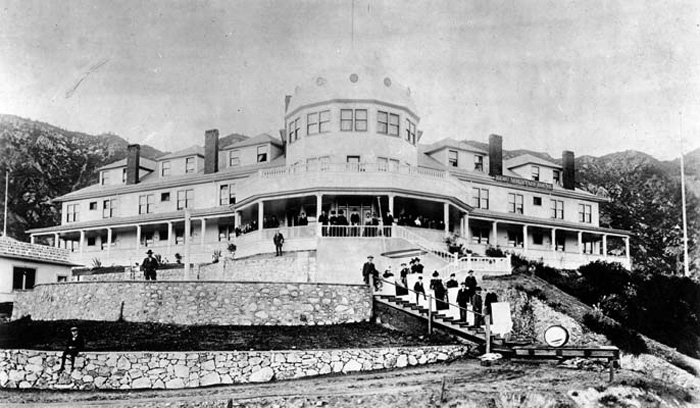 The formal opening of the Echo Mountain House was officially marked on November 24th by a second banquet. This time, Lowe was host to the bankers and businessmen of the Los Angeles area, and his thinly disguised purpose was to entice them to invest in the railway. One hundred and thirty persons answered invitations to the affair, which was, as the Star put it, "a credit to any hotel in the land." One of the guests was so impressed that he exclaimed that Professor Lowe could "fulfill any promise he might make, even if it were to build a hanging garden a mile high." Mount Lowe, The Railway in the Clouds, page 87. 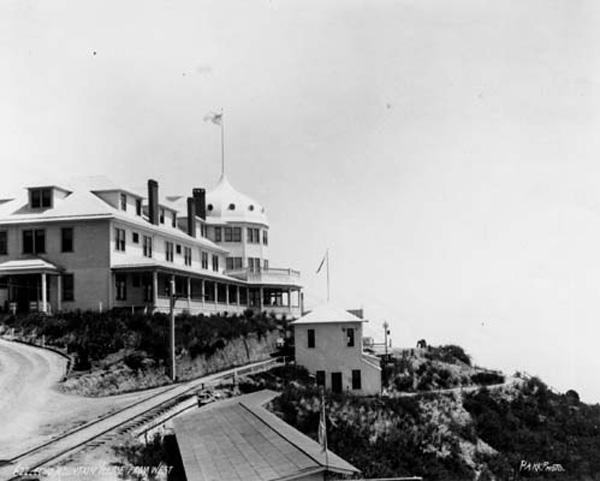 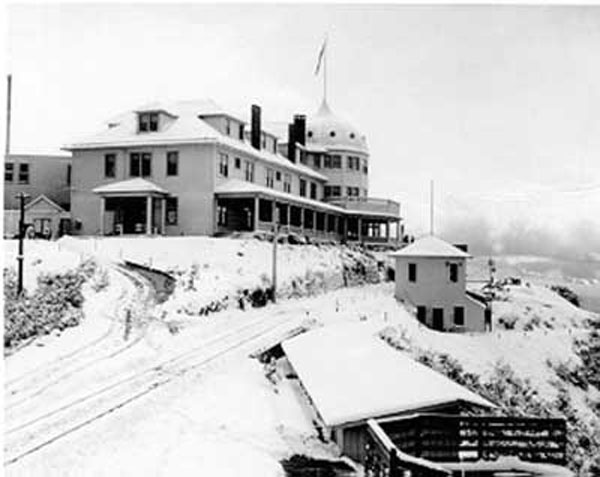 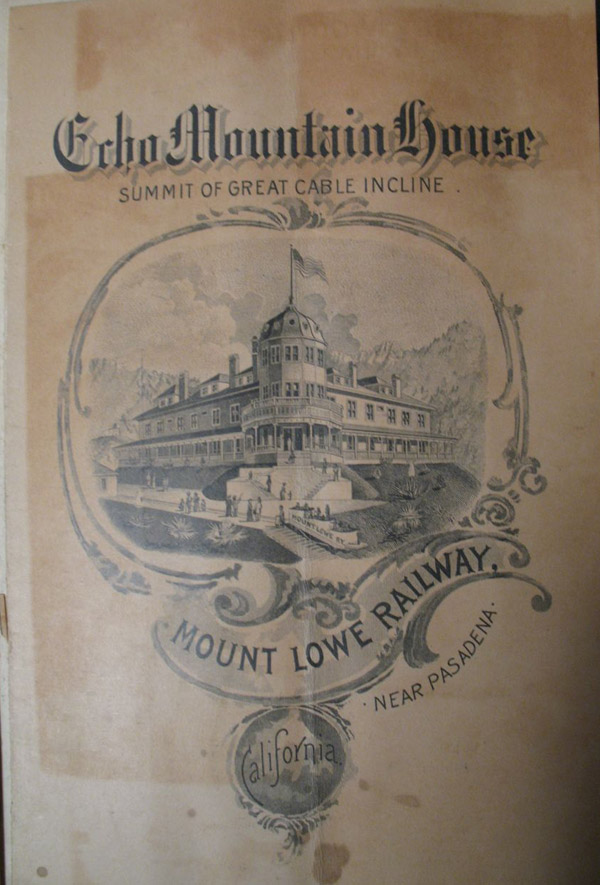 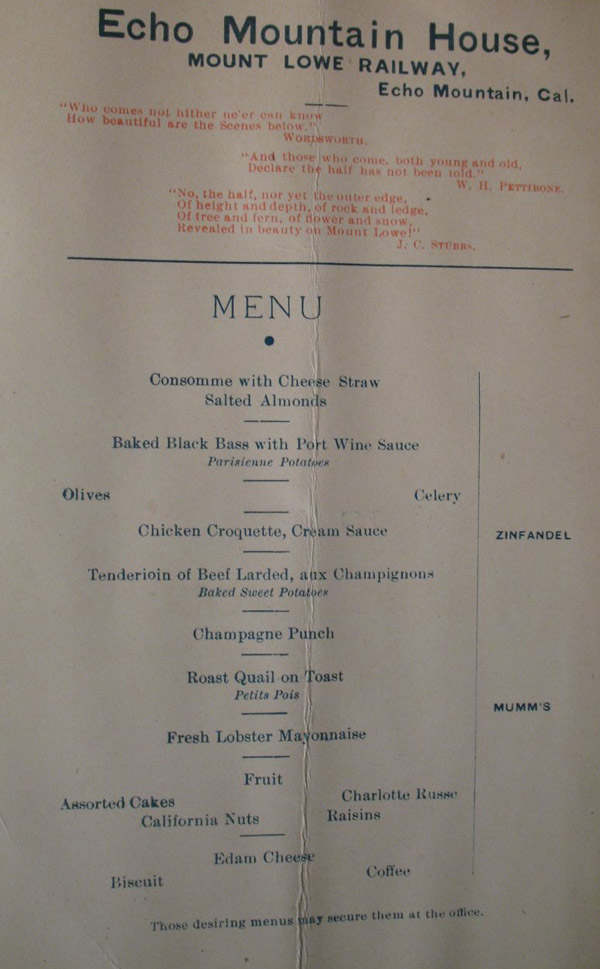 It was the custom of the resident culinary staff of the Echo Mountain House to arise about 4:30 in the morning to begin preparations for breakfast. Monday morning, February 5, 1900, started out no different from any other morning. Shortly before 5:00 AM, early rising Pasadenans could discern a small blaze, apparently at the rear of the hotel. There was no breeze whatsoever, but the fire proceeded steadily in spite of the efforts of about 50 of the guests to contain it. At six o'clock the blaze was at its height, burning downwards toward the ground floor. By seven, little smoke was to be seen in the city, and the beautiful Echo Mountain House lay in ashes, a total ruin. Cause of the blaze was ascribed to a defective flue venting over one of the large ovens. None of the other buildings on the mountain were harmed. Mount Lowe, The Railway in the Clouds, page 121.