Brigadier-General MARCY,
Chief of Staff, Army of the Potomac:

GENERAL: Accompanying this note is a map with some of the most important earth-works represented, and in the right place, as near as I can get them according to the map. There are other places where earth has been thrown up, but I shall have to ascend again to a high altitude in order to locate them. The work that commences at Widow Price's house runs to the woods a little to the right of Old Tavern, and on the farther end I should judge that 500 or more persons were at work this morning. There is also a small work to the right of the house, running into the woods.

The numbers upon the map are for the purpose of explaining the various points better when telegraphing from the balloon. Please preserve it for that purpose. I am greatly in need of a good field glass for the Mechanicsville balloon. If one can be obtained will you please send it by the orderly, and greatly oblige, 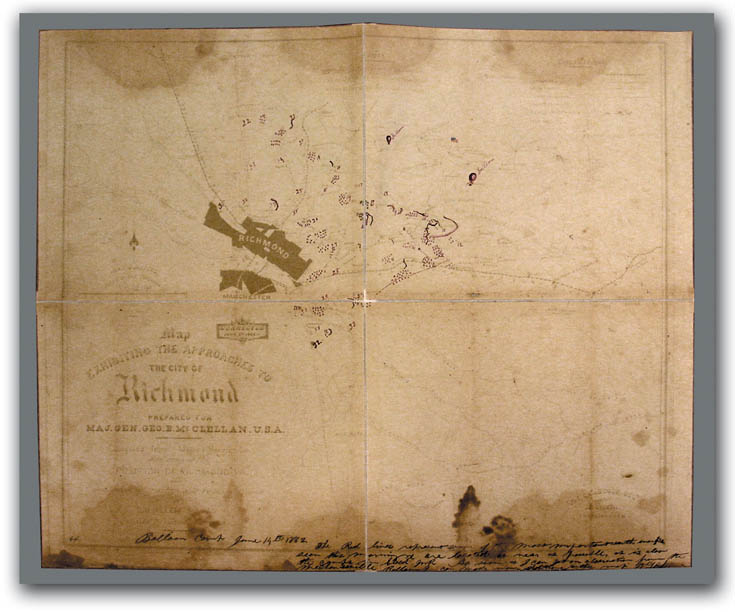 Richmond map used by Lowe on June 14, 1862, prepared by John C. Babcock and “E.J. Allen” (Allan Pinkerton). Lowe’s note at the bottom states “The red lines represent some of the most important earth works seen this morning and are located as near as possible, as is also the camps in black ink. As soon as I can get an observation from the Mechanicsville balloon, I can make many additions to this map.”