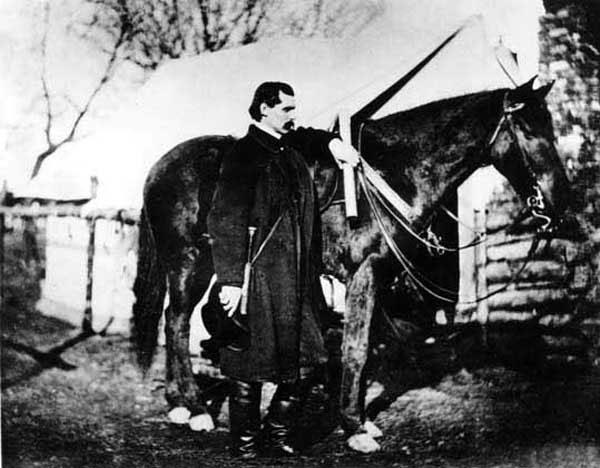 Thaddeus Lowe energetically established and maintained the Balloon Corps despite resistance by army captains in 1861 and 1863.

Nevertheless Lowe's operations in the first months of his field service show definite progress in the establishment and recognition of the observation balloon as an important and valuable adjunct to the military service. In the first place he demonstrated beyond all doubt that in reasonable weather he could make continuous daily ascensions and keep the enemy lines under constant observation for indefinite periods of time. A day by day survey of his operations from August 29, when the first ascension with the Union was made, to October 1, when  Lowe left for Philadelphia to begin construction of additional balloons, reveals that he made ascensions on twenty-three of the thirty-four days. The Union was aloft every day, sometimes several times a day, from August 29 to September 9, during which time observations were constantly taken and reported to the Union high command. A heavy gale on the evening of the 10th compelled Lowe to discharge gas in order to prevent damage to the envelope, but by the morning of the 12th he had completed reinflation and the balloon was again ready for field operations. Ascensions were resumed without interruption until the 17th, when replenishing again became necessary, and the ground crew was relieved temporarily to receive pay and fresh clothing. The Union was back in the field on the 19th, and was aloft almost daily until October 1, whenever the various general officers requested observations. The operations during this period thus established conclusively that the service, when competently managed, could be dependable and continuous in the field.

Lowe also demonstrated that a captive balloon could be safely and efficiently towed to and from various positions, and that observations could be taken from almost any reasonable point selected by the commanding officers. The unfortunate accidents experienced by Allen and Wise in transporting their inflating balloons were not repeated during this period of Lowe's activities, though the facilities at Lowe's disposal were  virtually the same as those of his two predecessors. Marches which involved towing the inflated Union were frequent incidents to routine field service. The aerostat was taken to and from Fort Corcoran and Washington; from Fort Corcoran and Arlington out to Ball's Cross Roads and back; over to Chain Bridge and across to the highlands  on the Virginia side; and back into Washington for reinflation on several occasions.

Only once did the balloon ever get out of control, and then not seriously. On the way through Washington to Fort Corcoran after the first reinflation, it escaped from the ground crew while Lowe was in the car; but it was recovered after a short chase of only a few blocks. No damage occurred at this time, or in any of the other numerous marches that became part of Lowe's daily routine.  After the failures of his predecessors in this respect, Lowe's demonstrations that his balloon could be maneuvered without accident or damage constituted decided progress towards his ultimate objective: proving to his superiors that balloon operations in the field were reliable and practical.

By the end of September, Lowe's activity had created a core of enthusiastic support for aeronautics among the general officers of the Army of the Potomac. Fitz-John Porter was a particularly influential partisan. On September 16, at Porter's request, Lowe had submitted a plan for the construction of a regular Balloon Corps. In final form, Lowe's plan called for the construction of four balloons, two of 20,000 cubic foot capacity and two 30,000 cubic foot models, together with portable gas generators to permit field operations.

Porter forwarded Lowe's recommendations to General McClellan, who had also received a request from Division Commander General William F. "Baldy" Smith for his own balloon unit. McClellan acted quickly. On September 25, 1861, Lowe received word from Quarter Master General Montgomery C. Meigs that, at McClellan's request, the aeronaut was authorized to proceed with the construction of the four balloons "together with such inflating apparatus as may be necessary for them and the one now in use." Meigs would pay all expenses up to $1,500 each for the large balloons and $1,200 each for the smaller ones. Soon after, Lowe was commissioned to order two more small balloons. Thus, by the spring of 1862, Lowe's Balloon Corps held title to seven observation balloons in addition to the original Enterprise.

The new balloons, including the Union, which went into service in August 1861, were constructed in Philadelphia. Each aerostat featured an envelope of doubled pongee silk. The mahogany valves were fitted with brass hinges and rubber springs. The finished bags were treated with Lowe's special varnish compound of benzine and a drying agent suspended in linseed oil. The netting was woven linen.

In addition to the standard load ring supporting the weight of the basket, a second spreader ring was provided on most of the balloons. Each balloon was also equipped with three 5,000 foot manila tethers and pulley blocks to be used in raising and lowering the craft.

In addition to the balloons, Lowe constructed twelve portable gas generators, six of which were in service by the spring of 1862. Designed for use with a standard army wagon body, each apparatus consisted of an eleven-foot tank standing five feet high. Internal shelves were provided to enable the operator to distribute the iron filings evenly. Sulphuric acid was added through a funnel on top, while a gastight grating was provided at the rear for removing the residue. The resulting hydrogen was fed through a limewater washer and cooler to remove the acid and cool the gas. A hand operated pump was used to fill the balloon.

On the march, a four balloon company required seven wagons in addition to those for the generator, washer, and cooler. Additional wagons carried the iron and glass carboys of sulphuric acid. If the balloons were to be operated with a telegraph apparatus, several more wagons were added to carry five miles of insulated wire and additional tools and equipment.

The wagon crew consisted of an aeronaut (Lowe or one of his assistants), a captain, and fifty noncommissioned officers and enlisted men to serve as wagoners and ground crew. When Lowe's system was in operation, such a crew could have the aeronaut in the air within three hours of the time the wagon train pulled to a halt.

With work on the balloons and generators under way in the fall of 1861, Lowe faced the problem of hiring a staff of aeronauts. William Paullin, one of the nation's most experienced balloonists and an old friend with whom Lowe had flown for the Japanese embassy in 1859, signed on board on October 11, 1861. Paullin was dispatched in response to General William F. Small's request for a balloonist. He later served with General Joseph Hooker's division at Budd's Ferry on the Lower Potomac.

John B. Starkweather was another of Lowe's early recruits. Apparently a Boston friend of the aeronaut, Starkweather signed on as a balloonist in mid-November 1861 and served with Brigerder General Thomas W. Sherman's command at Port Royal, South Carolina, before resigning in the summer of 1862.

Ebenezer Locke Mason, who joined the Balloon in December 1861, had followed a variety of careers before the war. As an aeronaut, Mason was assigned to various points on the Potomac during the winter and spring of 1861 and 1862. When pay for the aeronautical corps proved slow in coming, Mason refused to fly. Lowe, therefore, dismissed him from the corps in spring 1862.

Ebenezer Seaver, the only other aeronaut to join Mason's strike, was dismissed at the same time. Recruited by Lowe in November 1861, Seaver apparently had only limited prewar ballooning experience. Assigned to Fitz-John Porter's divisions, Lowe's old area of operations, Seaver replaced Paullin at Budd's Ferry and participated in the Richmond campaign early in 1862.

In addition to William Paullin, Lowe was eventually able to recruit a number of other very experienced aeronauts. James Allen, having failed to establish himself as head of the army aeronautical program, signed on with Lowe on March 23, 1862. His brother Ezra Allen's service with the Balloon Corps began that January. John Steiner had joined Lowe's operation in December 1861.

Jacob C. Freno, a Philadelphia lawyer with a taste for aeronautics, was recruited in January 1862. Freno had made a number of flights with Lowe and, apparently, Paullin. He had served as Lowe's assistant during the Cincinnati flights of 1861, then enlisted in the 66th Pennsylvania Infantry.

John R. Dickinson was the ninth and last of Lowe's aeronauts. A mysterious figure, Dickinson's name appears in only one of Lowe's dispatches, when he was reported to be in command of the Union at Washington in October 1861.

In addition to the aeronauts, the roster of the Balloon Corps included nonflying personnel. Lowe's father Clovis served as a balloon repairman and assistant to several of the aeronauts. John O'Donnell relieved Lowe of paperwork, while Richard Brown managed the balloon boat George Washington Parke Custis, which Lowe employed on the Potomac during the Peninsular Campaign. Civilian telegraphers and teamsters were also employed by the corps.

A variety of officers, noncoms, and enlisted men were detailed to Lowe from 1861 through mid-1863. One of the chief aeronaut's major administrative problems throughout the history of the corps related to the need to maintain a permanent cadre of trained military personnel.