Balloon Corps Moves Ahead of Cautious Union Cavalry - May 5, 1862 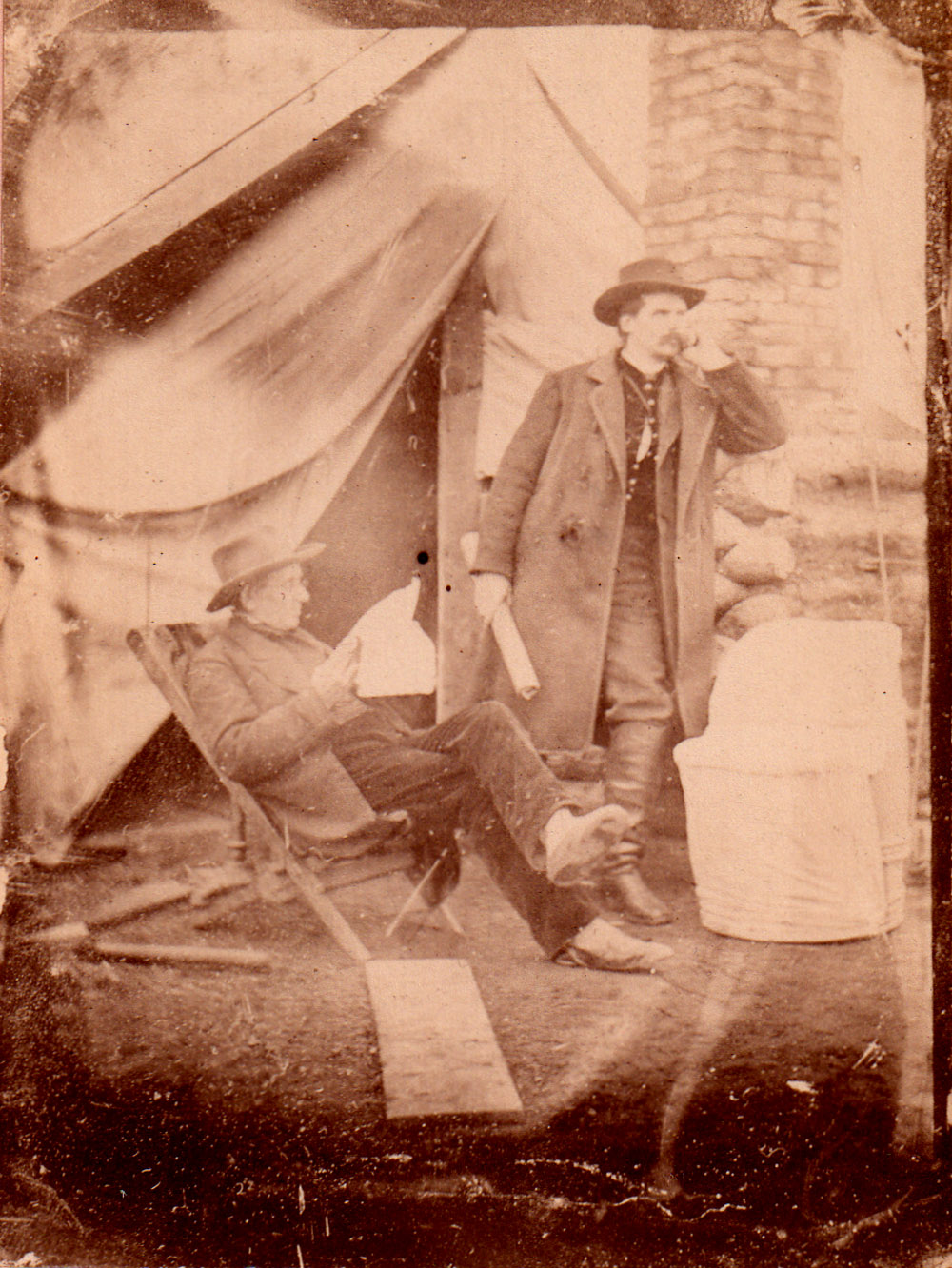 Undated photograph of Thaddeus Lowe and his father Clovis waiting on the army.

On the afternoon of the 4th of May I received orders to move everything pertaining to my department by water, with General Franklin's command. I was to proceed up the Pamunkey River until I reached the White House and bridge crossing the Pamunkey River. (typescript note: This house was once the residence of George and Martha Washington and it is supposed that the President's residence in Washington was named after it.)

This I did, starting early the next morning (May 5, 1862), passing by the cotton bale fortifications on the York River and soon into the little, winding, but easily navigated stream of the Pamunkey. Every now and then I would let the balloon up to view the surrounding country and over the ridge beyond the Pamunkey River valley, I saw the rest of the retreating Confederates, which showed me that our army had not gotten along as fast as was expected.

The balloon boats were the first to reach the White House landing and were even some distance ahead of the gunboats and so the first night, the balloon guard was the advance picket on the river bottom. Instantly I realized my precarious situation.

My outfit consisted of the balloon boat, a steam tug, one hundred and fifty men with muskets, a number of wagons, horses, and gas generators for three independent balloon outfits.

We arrived at the Lee Mansion, known as the White House, at six o'clock, and found the bridge crossing the Pamunkey on fire, which fully convinced me that I was well into enemy's country. This house was the residence of W.H. Lee, son of General R.E. Lee and the tents of McClellan's headquarters a little later surrounded it. With his usual fine feeling McClellan refused to make use of it.

I immediately landed my troops and had them surround a thick clump of young pines a short distance from the house. There we found the overseer and two house servants. The family had left a few minutes before on a special car that took them to Richmond. On entering the house I found that dinner was being served when my boats made their appearance, and that coffee was still warm in the cups and an inviting, friendly looking fire blazed in the great fireplace.

To carry out a bluff I immediately rushed a long line of tents along the edge of the locust grove in which the house stood, reaching down the river a quarter of a mile, and built as many fires as my men could get material for the purpose, making it appear as though we were strong, not only in numbers, but in equipment. The darker it got the more secure I felt, and we certainly had made a great display for a small squad. My three prisoners were being guarded and I sought to get information from them, but the overseer, a man of about fifty years, was exceedingly bright and evaded all my questions with unusual tact. He then stated that if I had got through with him he would like to go home. I stated that his home for the present would be with us and we would take good care of him. I then questioned the negroes separately and got a large amount of valuable information. The next morning I took observations and could see scouts on the ridge two miles beyond, but no apparent movement to disturb us, although a small force could have captured us in a few minutes if they had known my situation.

I anxiously looked across the fields towards Williamsburg to try to find some indication of our army on the move, but it was eight o'clock before I saw a column appearing through the woods. With my glass I assured myself that they were our troops headed by General Stoneman's cavalry. I immediately started out with my favorite orderly to meet them and soon outriders from the head of the column came out, and in a few minutes a second rider and orderlies left the head of the column and galloped towards me and soon General Stoneman and myself met again. He said that all I had said and done had proved of the greatest value, that he thought that he was in the lead towards Richmond, but found himself mistaken, and wanted to know what I intended to do. I told him that I was there to report to him, and I should be glad to be of service in his command. This pleased him and from that day to the day of his death we were the strongest and warmest of friends.