George Washington Parke Custis, a coal barge built in the mid-1850's, was purchased by the Navy in August 1861; fitted out with a gas-generating apparatus developed by Thaddeus Lowe; and modified by John A. Dahlgren at the Washington Navy Yard for her service as a balloon boat.

Early in the morning of 10 November 1861, steamer Coeur de Lion towed George Washington Parke Curtis out of the Navy Yard and down the Potomac. The next day Lowe, accompanied by General Daniel E. Sickles and others, ascended in his trial balloon from the barge off Mattawomen Creek to observe Confederate forces on the Virginia shore some 3 miles away.

On the 12th Lowe reported: "We had a fine view of the enemy camp fires during the evening and saw the rebels constructing batteries at Freestone Point." This operation and John La Mountain's earlier ascension from Fanny began the widespread use of balloons for reconnaissance work during the Civil War arid foreshadowed the Navy's future use of the air to extend its effective use of sea power. 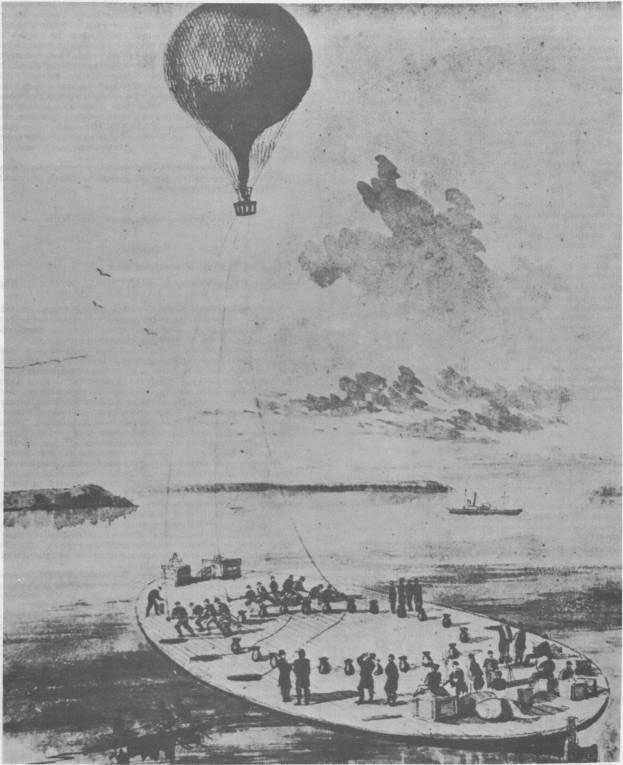 USS Coeur de Lion, an 110-ton (burden) side-wheel gunboat, was built in 1853 at Coxsakie, New York, as a civilian steamer. Later becoming a U.S. Light House Tender, she was loaned to the Navy soon after the outbreak of the Civil War and began her commissioned Navy service in early October 1861. Coeur de Lion was active thereafter on the rivers tributary to Chesapeake Bay. In November 1861 she towed the barge George Washington Parke Custis during Thaddeus Lowe's observation balloon operations over the Potomac River. During 1862-1864 Coeur de Lion captured or destroyed several would-be blockade running schooners and participated in a number of engagements with Confederate forces. Returned to the Lighthouse Board in June 1865, Coeur de Lion was sold in 1867. As the commercial steamer Alice she lasted until about 1873, when she was removed from shipping registers. 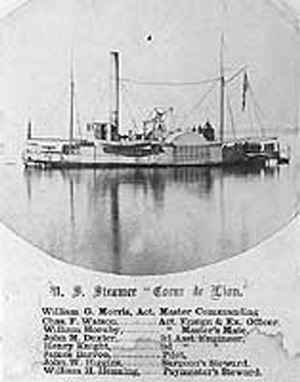 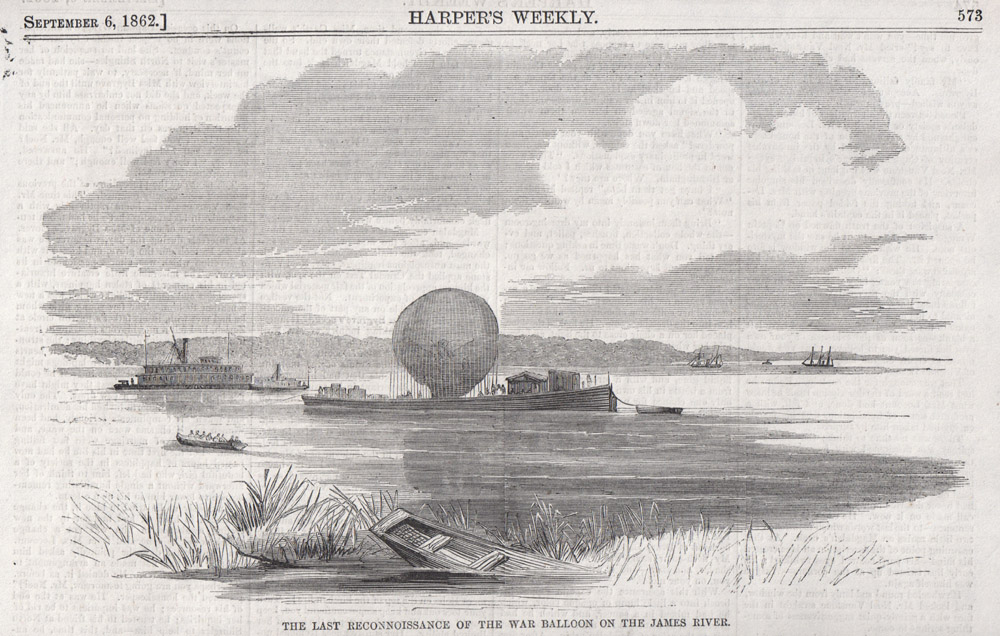 Aeronautic operations from the various positions occupied by the Federal Army along the Potomac soon disclosed the advantage of ascensions from the river and its adjacent tributaries. Likewise the establishment of widely separated stations of observation at different points on the extended Potomac lines led to the need of water transportation of supplies between balloon  stations.  As a result the balloon-boat USS G.W. Parke Custis was added to the equipment of the balloon service in November, 1861. This vessel had originally been purchased by the Navy Department in August of the same year for service as a coal barge in the Washington Navy Yard. She had been assigned to Lowe for the aeronautic service by personal instructions of Secretary Gideon Welles, to whom Lowe's application for a vessel had been referred. This balloon-boat, which may properly be called the first aircraft carrier in history, was approximately 8 years old at the time of her conversion to the aeronautic service. Her initial coast to the Navy had been $150. She had an overall length of 122 feet, a 141/2 foot beam and was 51/2 feet in depth of hold. Of very shallow draft, she had a carrying capacity of 75 tons in 21/2 feet of water, which was increased in deep water to 120 tons. This vessel was not equipped with engines, but was dependent upon an attending tug or small steamer for propulsion. In waters too shallow for towing, she could be propelled by large oars or heavy poles.

Under the direction of Lowe, the superstructure of the vessel was remodeled by naval carpenters to suit the requirements of her new service. The entire hull was covered over with a single flat deck, which provided a large level area for the inflation and ascension of the balloons. A small deckhouse on the stern was also added for the headquarters of the aeronaut in charge of the boat. The shallow draft and roomy hold made the vessel admirably suited to balloon operations. She could be towed into any position navigable by her attending tug, and by means of her poles and oars could be maneuvered through more shallow waters into positions of advantage for observation that were otherwise inaccessible. In addition to her usefulness in providing ascension areas on her deck, her hold also furnished ample space for the stowage and transportation of iron turnings, acid, and other materials and equipment. With her accompanying tug, she provided a rapid means of communication and transportation between distant balloon stations along the Potomac. During the fall of 1861 the balloon boat was particularly useful in connection with the operations of the aeronautic station with Hooker's Division at Budd's Ferry and with the unit assigned to General Stone's corps near Edwards Ferry at the other end of the Potomac lines. In the spring of 1862, the vessel accompanied the balloon corps to the Peninsula, and was operated to advantage in this first major compaign.