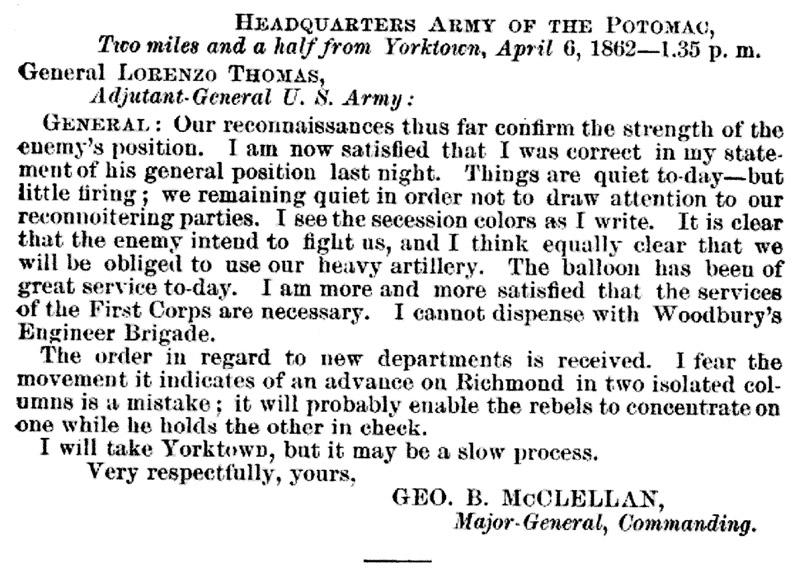 General McClellan, who was one of Lowe's most ardent supporters, summed up the feeling that many Union officers had in the aftermath of the accident, in a letter written to his wife that same day: I am just recovering from a terrible scare. Early this morning I was awakened by a dispatch from Fitz Johns Hd Qtrs, stating that Fitz had made an ascension in the balloon & that the balloon had broken away & come to ground some 3 miles SW - which would be within the enemy's lines! You can imagine how I felt! I at once sent off to the various pickets to find out what they knew, & try to do something to save him - but the order had no sooner gone, than in walks Mr. Fitz just as cool as casual - he had luckily come down near my own camp after actually passing over that of the enemy!! You may rest assured of one thing: you won't catch me in the confounded balloon nor will I allow any other Generals to go up in it!  War of the Aeronauts, pages 182-183.

3) General George McClellan did not believe reports from aerial reconnaissance of the evacuation of Yorktown on May 4, 1862.

I did not sleep any more, however, that night, and got the balloon ready for another ascension, which I made before daylight; but, as formerly, at this time in the morning I could see no camp-fires. As soon as it became a little lighter I discovered that the enemy had gone. This I immediately communicated to General Heintzelman, who on learning it ascended with me, satisfied himself of the fact, and reported it by telegraph to General McClellan, sending the message down from the balloon without descending. Memoirs of Thaddeus Lowe, page 120.

From above, Lowe and Heintzelman saw the rear guard of Magruder's army at a position one mile distant of Yorktown. The Rebels were falling back in anticipation of an attack on Richmond. "At first the general was puzzled on seeing more wagons entering the forts than were going out," Lowe observed. "But when I called his attention to the fact that the ingoing wagons were light and moved rapidly, while the outgoing wagons were heavily loaded and moved slowly, there was no longer any doubt as to the object of the Confederates." "It (was) fair to presume that the first reliable information given on the evacuation of Yorktown was that transmitted from the balloon to General McClellan by General Heintzelman and myself," Lowe said. War of the Aeronauts, pages 212-213.

McClellan was taken quite unawares by Johnston's withdrawal. When the Comte de Paris awakened him at six o'clock that morning to report Yorktown evacuated, he refused to credit the news and went back to sleep. To The Gates of Richmond, page 67.

4) General George B. McClellan began to curtail use of the balloons by Union officers just before the start of the battle of Fair Oaks. 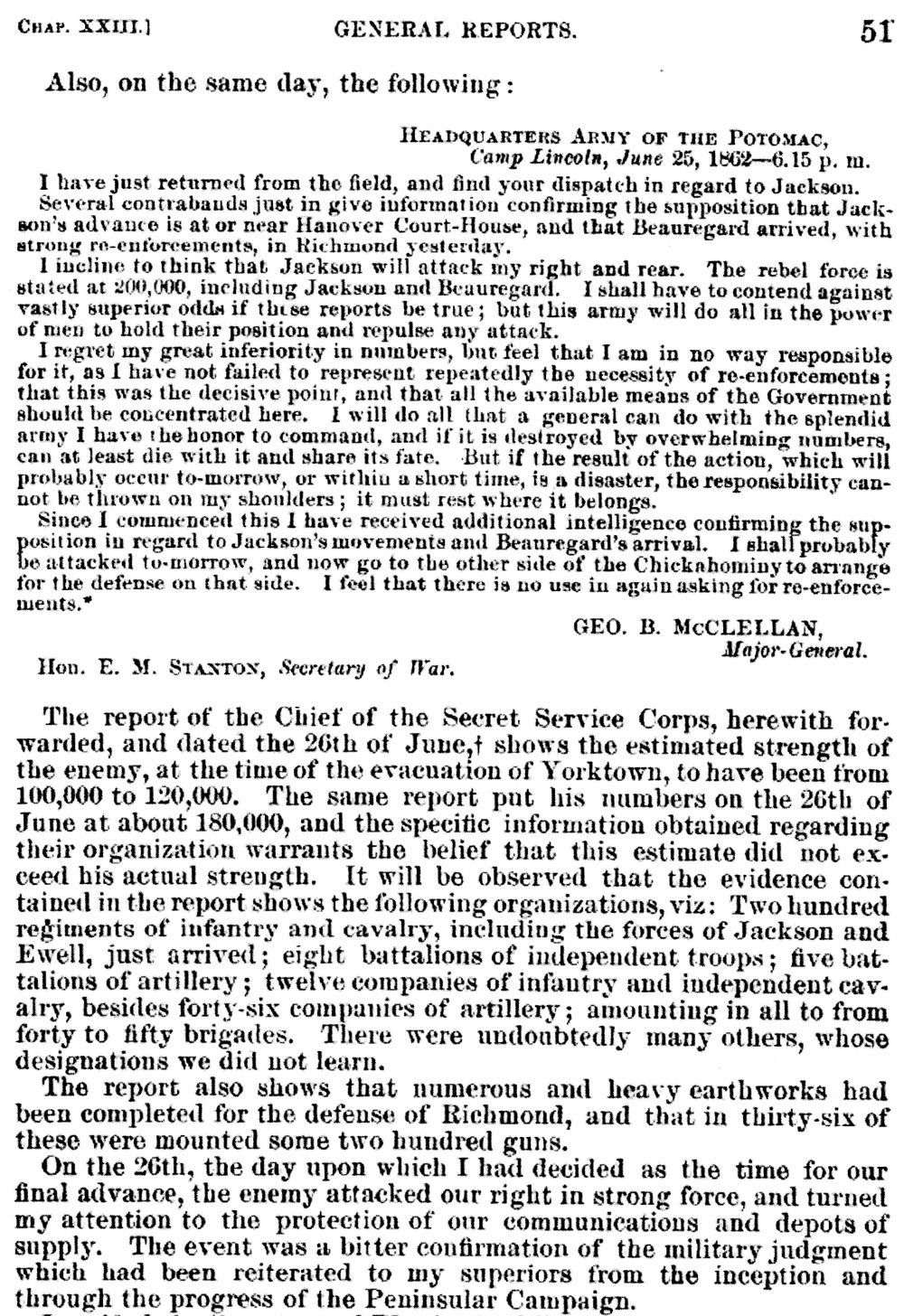 6) General George McClellan never thought to take the Balloon Corps with the Union army when shadowing Lee's army in Maryland.

"I received no orders until the morning after the battle of Antietam," Lowe said. "I started immediately, and on the third day from Washington I arrived with the train at Sharpsburg. The delay was occasioned by General A.A. Humphreys being ordered to take command of a division, and the aeronautic department having been left, without authority being vested in me to act independently, I was unable to accompany the army as formally. War of the Aeronauts, pages 253-254.

7) General George McClellan realized too late the importance of aerial reconnaissance after the battle of Antietam.

Lowe later said that at the battle of Antietam McClellan remarked on several occasions that a balloon would have been invaluable to him. "He repeated this when I arrived," Lowe recalled. "It was evident that he was extremely anxious to obtain information of movements which could only be obtained by the aeronaut, which if he had obtained might have resulted in the complete defeat and utter rout of the enemy while trying to effect his escape (back to Virginia).

In the aftermath of Antietam it is likely that McClellan seized on the Balloon Corps's absence as part of the excuse for his dismal performance. It certainly would have fit the general's long-standing pattern of complaining that he lacked both the men and the material to defeat Confederate forces - forces he consistently overestimated during the course of the war. But in the end, Lincoln and his war cabinet were finished with the general's litany of excuses. War of the Aeronauts, page 254.