National Air and Space Museum of the Smithsonian Institute 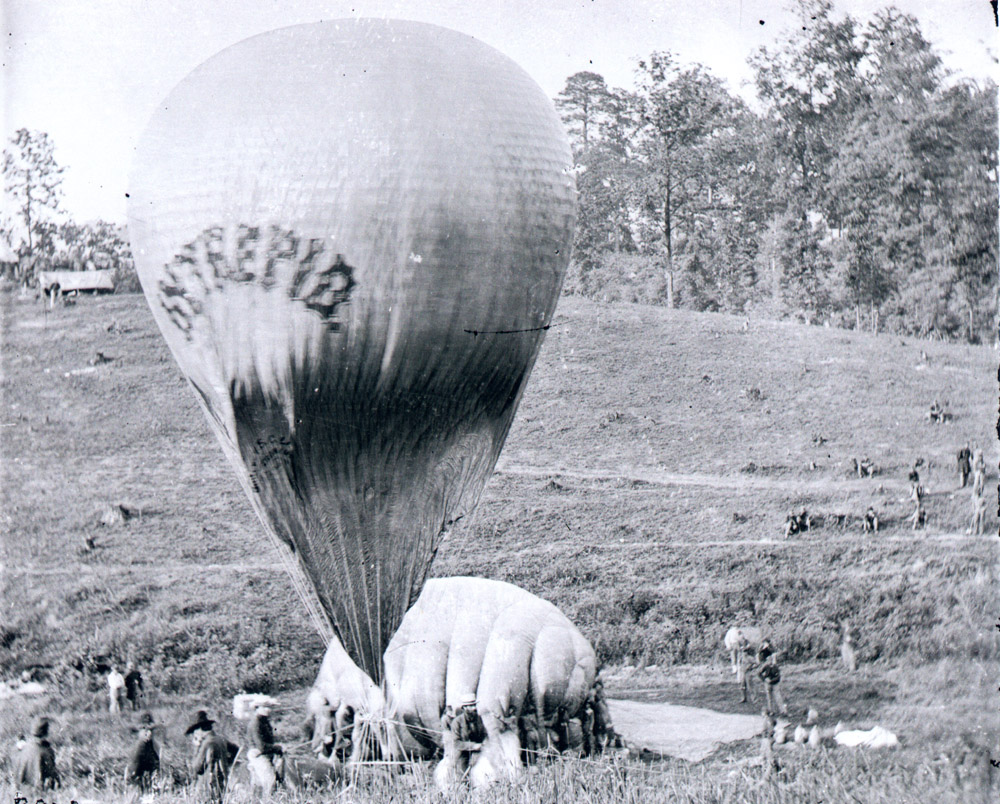 Thaddeus Lowe foreground waiting for the Intrepid balloon to be fully inflated by hydrogen gas from the Constitution balloon on May 31st.

On the 31st of May, at noon, I ascended at Mechanicsville and discovered bodies of the enemy and trains of wagons moving from Richmond toward Fair Oaks. I remained in the air watching their movements until nearly two o'clock when I saw the enemy form in line of battle, and cannonading immediately commenced.

Not having my telegraphic communication here, I dispatched one of my assistants to headquarters with a verbal message, I had been using two of the smaller balloons in making these observations, the "Washington" at Mechanicsville and the "Constitution" near Dr. Gaines' house, but I saw we were facing a great battle and that my large balloon the "Intrepid" would be needed in order that I might attain greater altitude and also have my telegraphic apparatus and operator with me, so I telegraphed to the balloon station near Dr. Gaines' to inflate the "Intrepid" immediately and mounting my horse, I started at a mad gallop for the balloon camp.

When I reached the camp, six miles distant, the "Intrepid" was only partially inflated and it would still require an hour to generate the gas and every minute was precious. Never was I so much needed!  I jumped into the car of the "Constitution," which was always kept fully inflated, but it did not have the ascension power necessary to carry the additional weight of the telegraphic apparatus and the operator, but I made an observation that showed that the Confederates were marching at attack our troops on the right bank of the Chickahominy before the completion of the bridge would permit those on the left bank to join them. This would mean the destruction of our army. I descended immediately and sent off the most important dispatch of nay during my whole experience in the military service.

I knew I should be in the air constantly and was at my wit's end what to do. If only I could get the gas from the "Constitution" into the "Intrepid."  Just then I spied a ten inch camp kettle lying on the ground. Instantly I seized it and had one of my mechanics cut out the bottom. The "Intrepid" was disconnected from the inflating apparatus and by means of the camp kettle attached to the "Constitution" and in a very short time the gas filled the larger balloon. An hour saved!

Immediately the "Intrepid" apparatus was placed in the car of the balloon and accompanied by Mr. Park Spring, the Chief Telegrapher, I ascended to a height of a thousand feet and there witnessed the titanic struggle.  The whole scene of action was plainly visible and reports of the progress of the battle were constantly sent till darkness fell upon the grand but terrifying spectacle.