National Air and Space Museum of the Smithsonian Institute photographs

Lowe Warns of Confederate Attack at Fair Oaks Train Station from Mechanicsville - May 31, 1862 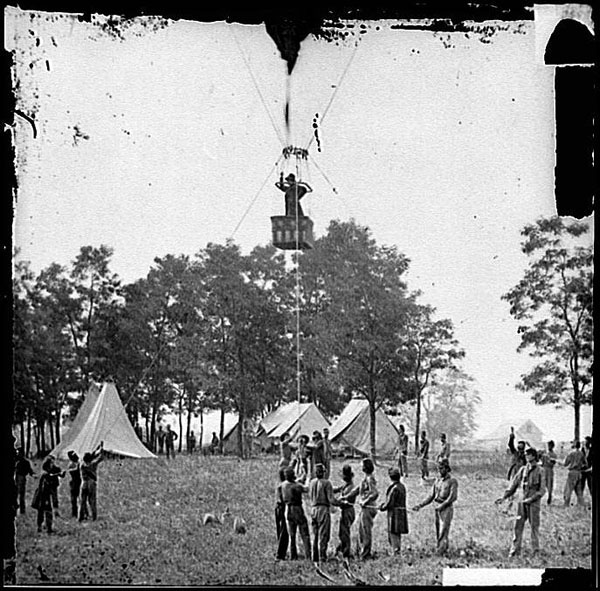 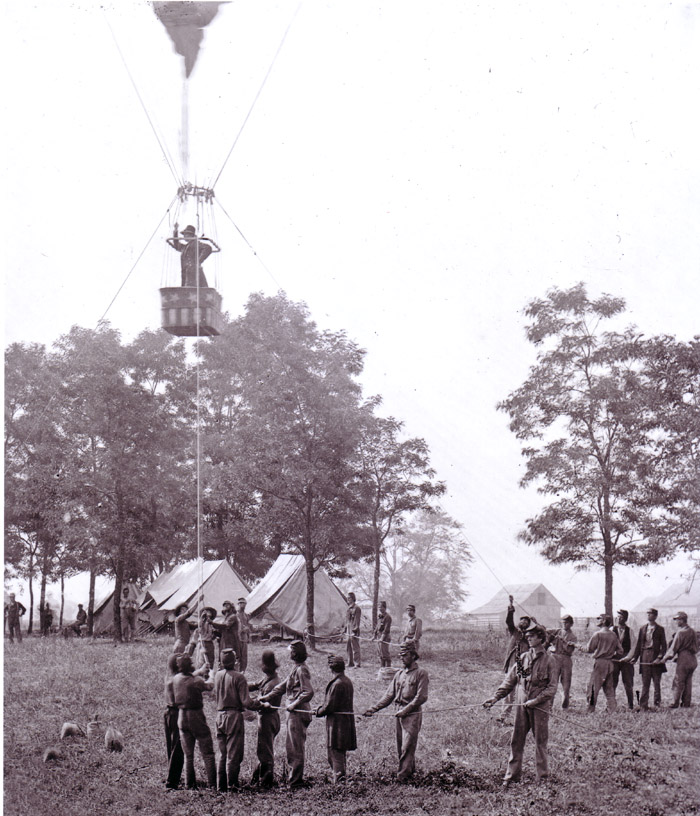 webmaster note: Thaddeus Lowe was unable to make but one balloon ascent on May 30, 1862 due to severe thunderstorms.

To the Gates of Richmond - The Peninsula Campaign, page 120.

As General Johnston put the final touches on his battle plan that evening, the two armies were battered by a thunderstorm of such violence that men called it quite simply the worst they had ever seen. Rain fell in torrents and lightning flashed almost continuously, and the thunder was described as hell's artillery. A bolt of lightning hit the tent of the 44th New York's quartermaster, killing him instantly and stunning twenty other men. Near Richmond one encampment came to be remembered as Camp Lightning after four men of the 4th Alabama were killed by a single strike. In his journal Major Wainwright described the storm as "another of those rains in which the very sluice gates of heaven seem to be opened, and the water drops in masses for hours."

Joe Johnston viewed the storm as a godsend. Now the Chickahominy would surely rise in flood and make it difficult - perhaps even impossible - for McClellan to reinforce his advance across the river during the battle. The flooding might also act as insurance against any Yankee attempt to counterattack toward Richmond over the upper Chickahominy crossings. G.W. Smith described Johnston as "elated" at his prospects.

Heavy rains drenched the region on May 30, swelling the banks of the Chickahominy. Through it all, however, Lowe remained undaunted and later that evening he was again in the air.

"The great camps around Richmond were ablaze with fires," Lowe observed that evening. "I had then experience enough to know what this meant, that they were cooking rations preparatory to moving."

From his vantage point above Mechanicsville, Lowe was able to ascertain the movements of the Confederate army early on the morning of May 31. "At daylight ... I took another observation, continuing the same until the sun lighted up the roads," Lowe said. "The atmosphere was perfectly clear. I knew exactly where to look for their line of march, and soon discovered one, then two, and then three columns of troops with artillery and ammunition wagons toward the position occupied by General Heintzelman's command."

Lowe quickly relayed his observations to General McClellan. According to Lowe, McClellan was unable to send reinformations across to bolster the positions of Keyes and Heintzelman. The torrential rains were incessant and work on the bridge across the Chickahominy was wasted when flood waters swelled the river. McClellan sent orders to General Edwin Sumner, commander of II Corps, to redouble the efforts of his men to rebuild the river crossing at New Bridge as quickly as possible.

Back in the air with the Washington later that day, Lowe continued with his observations of Rebel movements. "I ascended at Mechanicsville and discovered bodies (units) of the enemy and trains coming from Richmond toward Fair Oaks," Lowe said. From his position on the opposite shore of the Chickahominy, the Confederates were only four miles from Lowe's position. "I remained in the air watching their movements until nearly two o'clock when I saw the enemy form in line of battle, and cannonading immediately commenced."

The confusion created by Johnston's bold move prompted Lowe to expand his aerial observations. He realized that rapid communication of his observations was necessary, but the relatively weak lifting ability of the Washington and the Constitution negated the use of telegraph equipment. When Lowe returned to earth he had a message dispatched to James Allen at the Gaines farm to prepare the Intrepid for inflation.

The Intrepid was considerably larger than the Constitution, which was already on duty there, and Lowe planned to use its greater lifting ability to obtain an even more commanding view of the battlefield.