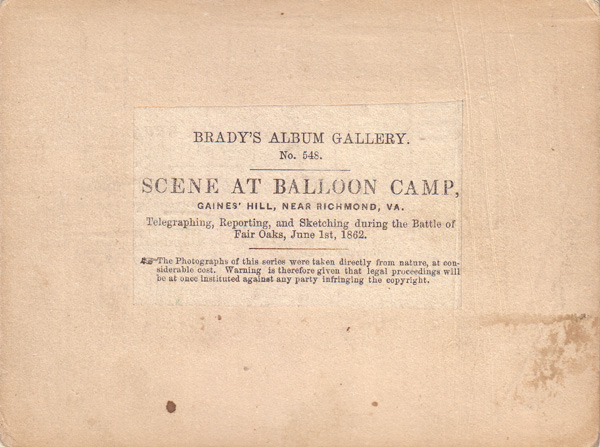 The Battle of Fair Oaks Balloon Observation by Lowe - June 1, 1862 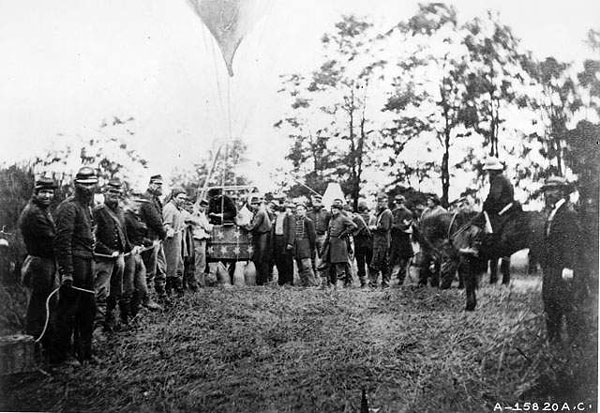 Lowe sending a telegraph message from the basket of the Intrepid - June 1, 1862

On the following morning I ascended at 4 a.m., but owing to fog I was unable to see anything until after 6 o'clock, and at 7 o'clock I sent the following dispatch by telegraph from the balloon.
Many dispatches were sent in this way, copies of which were not preserved:

I have just obtained a splendid observation from the balloon. I find the enemy in large force on the New Bridge road, about three miles this side of Richmond. In fact, all of the roads that are visible are filled with infantry and cavalry moving toward Fair Oaks Station. There is also a large force opposite here, and in the same position that they were yesterday, but not in motion. I can see smoke in the woods where the firing ceased last night. I hear no firing at the present. In the immediate vicinity of the heights opposite here there are nothing but pickets visible.

I am satisfied from what I heard on the previous evening that an attack by the enemy on the next morning was not expected. The above dispatch, therefore, giving timely notice that the enemy did really intend making a more severe attack than even that of the previous day, must certainly have been of the greatest importance, and gave our forces an opportunity of preparing for a vigorous defense.
I would here remark that of all the battles I have witnessed, that of Fair Oaks was the most closely contested and most severe, and the victory, in my opinion, was due to the valor and skill of General Heintzelman, who nobly sustained himself against great odds in favor of the enemy.
To the following reports I would call especial attention, as they speak for themselves.
The following order from General Humphreys was received one hour after my first report:

Have you been able to ascend this morning? Your balloon should be in connection by telegraph, and messages should be sent constantly--at least every fifteen minutes. The balloon must be up all day. The balloon at Mechanicsville should likewise be sent up at once, and remain up all day.
Same reports must be made from it as from the balloon at Doctor Gaines'.

A. A. HUMPHREYS,
Brigadier-General.

The reserve of the enemy are considerably strengthened on the New Bridge road, and troops are still moving that way from Richmond; they do not seem to be gathering in any great numbers on the immediate heights along the Chickahominy. Our supports, with army wagons, are in a southeast direction from here, advancing, and about three miles from the fire of yesterday. Musketry is in constant operation in the same direction as yesterday. The banks of the Chickahominy are overflowed as far as can be seen.

Brigadier-General HUMPHREYS, or
General R. B. MARCY,
Chief of Staff:

My ascent and observations just completed show the firing of the enemy to be in the same position. The road in the rear of the firing is filled with wagons and troops. About two miles still farther to the rear of Fair Oaks Station, and on the Williamsburg stage road, Charles City road, and Central road, are also large bodies of troops; in fact, I am astonished at their numbers compared with ours, although they are more concentrated than we are. Their whole force seem to be paying attention to their right. A regiment has just marched to the front, where we are preparing a crossing. Their large barracks to the left of Richmond is entirely free from smoke, and, in fact, the whole city and surroundings are nearly free from smoke, which enables me to see with distinctness the enemy's earth-works. Quite a large body of troops are on the other side of the river, about two miles from here, to our left.
The weather is now calm, and an excellent opportunity is offered for an engineer officer to accompany me.
The balloon at Mechanicsville is constantly up.

Direct your attention to a force said to be approaching toward our left, apparently to attack the working parties at the bridge below New Bridge. It is said a gun is planted to strike the bridge. Send me intelligence by bearer and at once communicate to me or General ----- , when present, what is passing.

About one hour ago a full regiment moved up into the woods toward where our left crossing is being made. I have seen no artillery moved up, nor can I see any from here. I think, however, there is artillery in the woods.

The enemy has been repulsed wherever he attacked. Watch the motions of the enemy and his wagons and see where goes the force before Mechanicsville.

Can you see General Sumner's corps near the line of railroad about four miles from the Chickahominy? Was the train of our wagons you saw going toward Richmond or toward James River? Can you see the gun-boats on James River? Which direction does the smoke run?

At 11 o'clock could see what I understood was General Sumner's corps near the line of railroad, but not more than two miles from the Chickahominy. The wagons I saw were moving toward James River. They had not reached the road to Richmond.
I cannot see the gun-boats, but can see heavy smoke arising from the valley at two points, and hear heavy reports from cannon. The enemy's reserves seem to be stationed at present in all the roads.

The following were answers to questions asked by General Porter:

The enemy remains quiet opposite New Bridge. There are infantry and a battery of artillery near the river, where our left column is preparing to cross. The wind is now too high to get a view opposite Mechanicsville, and I am not in immediate communication with the balloon there. By the appearance of the smoke when up I would say that we hold our ground, and more too. The Chickahominy is fast rising; in front of this point the whole fields resemble a lake.
The enemy's wagons also seem to be stationary opposite here.

Last firing is two miles nearer Richmond than this morning. Camp-fires around Richmond as usual, showing that the enemy are back. General Humphreys and staff are now up, and will endeavor to ascertain fully and answer all your questions.

General Humphreys and self have just descended. The enemy is still in the field opposite here, and their works are visible all along the Williamsburg and New Bridge roads to Richmond. Their barracks, which were this morning deserted, are now occupied. I can see no wagons moving in any direction. Brigadier-General Humphreys will give you a full account of the last observation. I will ascend again at daybreak to-morrow.

The battle was over and while indecisive, what advantage there was, lay with the Army of Potomac. It had more than held its own.  Major General A. W. Greeley, late Chief of the signal service, distinguished author, explorer and soldier, did me the honor to say in an article in Harper's Weekly of June 1900: "It may be safely claimed that the Union Army was saved from destruction at the Battle of Fair Oaks, May 31 and June 1, 1862, by the frequent and accurate reports of Professor Lowe."