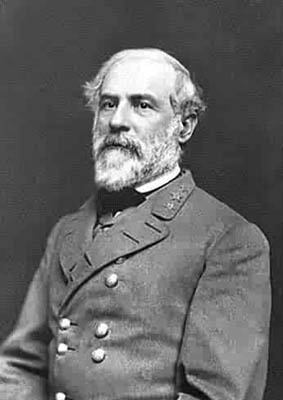 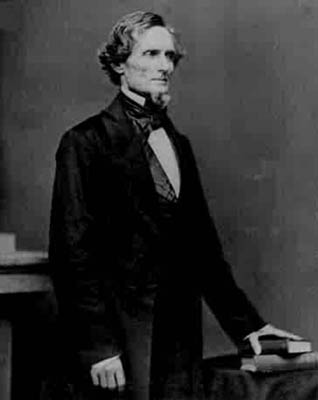 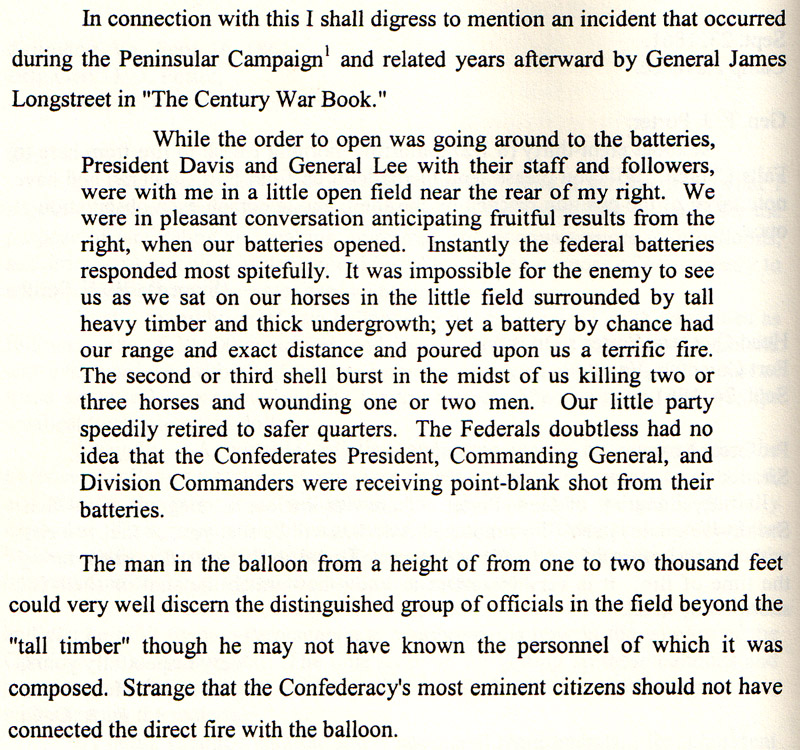 WAR OF THE AERONAUTS by Charles M. Evans, page 114

During the course of directing ground fire on an unseen enemy position, a target far off in the distance was selected. According to Lowe, the observing balloon was at a “height of one to two thousand feet and could very well discern a distinguished group of officials in a field beyond the tall timber.”  Although it was not known just who the “distinguished group of officials” were, the order was given to fire in the general direction of the meeting, with the balloonist adjusting range and trajectory of the shots.

Years after the incident, Thaddeus Lowe came across the recollections of Confederate general James Longstreet on the events of that day:

While the order to open was going around to the batteries, President Davis and General Lee, with their staff and followers, were with me in a little open field near the rear of my right. We were in pleasant conversation, anticipating fruitful results from the fight, when our batteries opened. Instantly the Federal batteries responded most spitefully. It was impossible for the enemy to see us as we sat on our horses in the little field, surrounded by tall, heavy timber and thick undergrowth; yet a battery by chance had our range and exact distance, and poured upon us a terrific fire. The second or third shell burst in the midst of us, killing two or three horses and wounding one or two of our men. Our little party speedily retired to safer quarters. The Federals doubtless had no idea that the Confederate President, commanding general, and division commanders were receiving point-blank shot from their batteries. (Robert Underwood Johnson and Clarence Lough Buell, Battles and Leaders of the Civil War, Volume III, pages 400-01.

From Longstreet’s retelling of this incident, Thaddeus Lowe was convinced that the havoc rained downed upon the Confederacy’s high command that afternoon was a direct result of balloon-directed artillery fire.

Note: The above Longstreet reference is actually from the battle of Glendale on June 30th, however, President Davis was targeted during the Battle of Fair Oaks.

May 31 found Lee still restless. No commanding duties held him at his office. An irresistible desire to see what was happening on the front of the opposing armies led him to ride with some of his lieutenants to Johnston's headquarters. Learning that Johnston had gone forward, Lee went on. He found Johnston at a new headquarters. There was a tenseness in the air. Officers were coming and going. Johnston was preoccupied. A general movement evidently was afoot. That obvious fact Johnston must have announced to Lee, but he did not explain his plan in detail or tell Lee when the battle was to open.

Noon passed. Presently, from the southeast, came the intermittent mutter of heavy guns and, very faintly, after 3 o'clock, a sound that Lee's ear took to be the sound of musketry. But, no, Johnston explained; it could only be an artillery duel. Ere long, orders reached the troops waiting at the forks of the road, the word of command was passed, and Whiting's men hurried down the road that led toward the enemy.

Now a familiar mounted figure turned into the lane from the road. It was the President. A moment later - either by chance or with intent to avoid an embarrassing meeting - Johnston rode away across the field, in the direction of Whiting's march. Lee went out to meet Mr. Davis. The President's first question was what the musketry-fire meant. Lee explained that he thought it was musketry, but had been assured by Johnston that only artillery was in action. Together the two walked to the rear of the house and listened. There was now no mistaking the sound, faint though it was. Either a heavy skirmish or a battle was in progress.

Davis, always a soldier at heart, could never resist the impulse to ride to the sound of firing. He returned to his horse and started forward. Lee rode with him. It was now late afternoon. If a battle was being fought, night would soon end it, one way or another. They went down the road for nearly a mile, with a thick wood on their right and open ground on their left. Then, beyond a lane leading off toward the Chickahominy, they found a heavy tangle of timber on their left also. Whiting's and Pettigrew's brigades had left the road near this point and had deployed on the left, driving back Federal pickets to an unseen line.

Before they knew it, Lee and Davis were under hot fire. To their left, hidden Federal batteries were pouring a regular and well-placed fire into charging ranks that foundered over fallen logs and through the bushes, vainly seeking the Federal infantry.

The Life and Death of Jefferson Davis by A.C. Bancroft, page 24.

Mr. Davis was present with Lee during most of the fight at Fair Oaks (May 31). Frequently under fire and in consultation with his generals in exposed positions, he was conspicuous in his efforts to animate his troops. After the wounding of General Joseph E. Johnston, Mr. Davis assigned Lee to the command of the Army of Northern Virginia, and there followed a positive change in the Confederate military policy, Lee's vigorous and aggressive policy being in accordance with Mr. Davis's views. For some time Mr. Davis remained constantly with his army and once he narrowly escaped death from the fire of a Federal battery.

The next spring, President Davis took to the saddle again. Before he left for the Seven Pines battlefield, however, he packed some of his books, his sword, the pistols he had used at Buena Vista, and his dressing case and sent them to his wife Varina, safely away from the front in Raleigh, saying darkly, "they might have a value to the boys in after time, and to you now." At Seven Pines on May 31, Postmaster General Reagan warned the president, who apparently came under fire once, not to expose himself to the enemy. Davis returned to Richmond that night, but he went back to Gustavus Smith's headquarters on horseback on June 1 and came close to blundering into the range of a Federal battery. In the Seven Days' Battles at the end of June, Davis again "was on the field, but did not interfere with Lee," as John B. Jones put it. "Every day he rides near the battle-field, in citizen's dress, marking the fluctuations of the conflict, but assuming no direction of affairs in the field." Davis seemed to long for some miraculous opportunity to assume a personal military role. Indeed he told his daughter after the war, when she asked what he would like to do if he could live his life over again, "I would be a cavalry officer and break squares."

As soon as the President learned that a fight was in progress, he called for General Lee. Together they rode out and arrived "in time to see the battle mismanaged." The Confederate staff work was woefully inefficient, and the attack was not going as Johnston had planned it. Davis and Lee could not resist the impulse to ride nearer to the sound of firing. Proceeding farther down the road for almost a mile, they came upon a heavy timbered wood with a field of green oats in a clearing. Suddenly they were under fire from concealed Federal batteries. In a smoke-filled scene of confusion, Postmaster General Reagan galloped up and chided the President about exposing himself so recklessly. But with the smell of battle in his nostrils, Davis was reluctant to leave. Dusk was descending when an excited messenger on horseback informed the President that General Johnston had been severely wounded. Davis turned his horse and soon came upon Johnston, being borne on a litter, conscious, but in considerable pain.

About 1 P.M. on May 31, Davis and his staff began hearing cannon fire from along the Nine Mile Road. The increasing blasts indicated that the battle (Seven Pines) that had been expected for several days was finally under way, and around 4 P.M. the president, aides William Preston Johnston and Joseph C. Ives, and Postmaster General John H. Reagan started for the front. They reached Joseph E. Johnston's headquarters about an hour later, only to see the general riding off with Whiting's division. A number of staff officers believed Davis' arrival caused the general to venture to the front lines in an attempt to avoid being questioned by the president. Davis had heard musket fire as he approached the headquarters, and so had Lee, who had arrived much earlier, but Lee informed Davis that Johnston had not heard the musketry and was convinced that the battle so far was "nothing more than an artillery duel." Neither had been told that Johnston had planned a major offensive to be launched during the morning. Davis, his staff, and Lee rode toward the firing and reached the edge of an open field soon after six o'clock, just in time to witness a disorganized charge by Whiting's troops. William Preston Johnston wrote that during the attack, "the shells fell around us, cutting down the tops of the trees." A correspondent recalled that "when we were in easy range of the enemy and their fusillade upon us with small arms was very lively, I remember seeing and recognizing (Davis) sitting on his 'battle horse' immediately behind our line of battle ... He was dressed in citizen's apparel, with a high silk hat ... I was much struck with the calm, impassive expression of his countenance and his proud bearing as he sat erect and motionless, intently gazing at the enemy. One feeling alone shone on his face, and that was a longing to wade into the fight. Bullets whistled plentifully around, but he never bootled his eye for them." Reagan by then had rejoined the president and "protested" against Davis' "unneccessary exposure." As the Confederates fell back from the fight in disarray, Davis' party tried to rally the troops, and Davis sent three messengers requesting reinforcements from Magruder. Johnston was wounded during the shelling, leaving G.W. Smith in charge. From Smith the president finally learned of Johnston's plan and the problems in its execution. When darkness brought a close to the firing, Davis and Lee headed back to Richmond together. Davis returned to the front the next day and spent the afternoon conferring with his generals and surveying the situation along the Nine Mile and Williamsburg roads.