BEFORE THE CIVIL WAR

Library of Congress - Special Thanks to Steve and Patrice Demory

Consoling Letter from Percival to His Brother Thaddeus - November 2, 1860 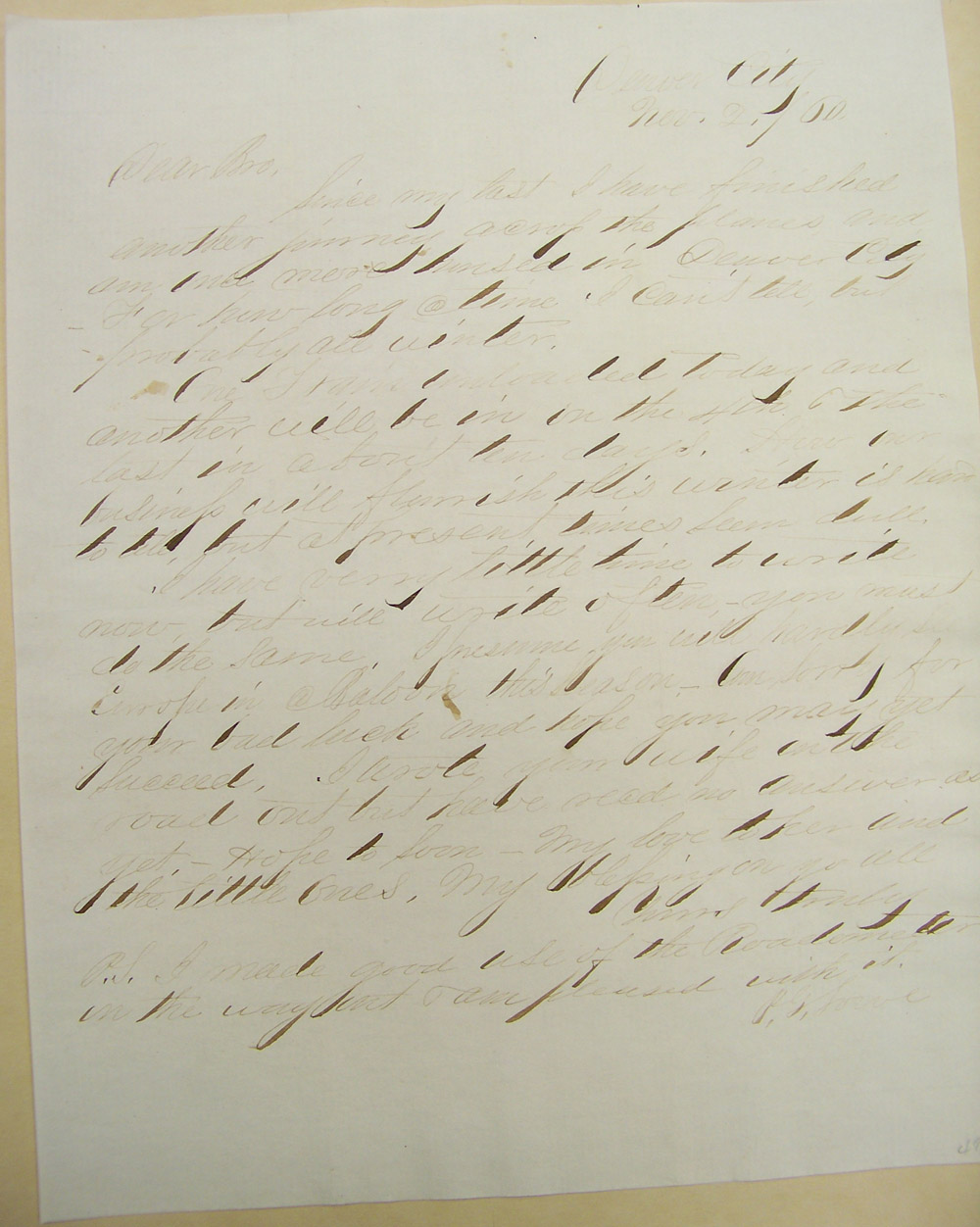 Consoling Letter from Percival to His Brother Thaddeus - November 2, 1860

Since my last I have finished another journey across the plains and am once more housed in Denver City. For how long a time, I can't tell, but probably all winter.

One train unloaded today and another will be in on the 4th & the last in about ten days. How our business will flourish this winter is hard to tell, but at present, times seem dull. I have very little time to write now, but will write often,- you must do the same. I presume you will hardly see Europe in a Balloon this Season. - Am sorry for your bad luck and hope you may yet succeed. I wrote your wife on the road out but have recd no answer as of yet. - Hope to Soon - My love to her and the little ones, My blessings on you all

P.S. I made good use of the Roadmeter in the way sent & am pleased with it.

Notes by Steve and Patrice Demory

These two letters were written to Thaddeus Lowe by his brother Percival Green Lowe. One on September 30th from Leavenworth, Kansas, and the next one from Denver City, and addressed to Thaddeus' home at No.12 Rose Street in New York City, even though Thaddeus was in Philadelphia at the time. The envelope of the September letter is also shown. To put it in context, here is some of the background on the events discussed. The letters are transcribed with all punctuation, abbreviations, spelling and grammar as they appear. They were examined and photographed by Steve and Patrice Demory in Nov. 2010, at the Manuscript Division or the Library of Congress in Washington DC and is part of the "Lowe Papers" in the collection of the American Institute of Aeronautics and Astronautics.


Both letters refer to the unsuccessful flight attempt, in Philadelphia, of Thaddeus' renamed balloon "The Great Western". More can be read on this in the book Military Ballooning by F. Stansbury Haydon, pages 157-162.

Percival discusses his business in Denver City, "Clayton, Lowe & Company" which was a mercantile business selling supplies to miners and prospectors. Percival's part in the business was the transportation of goods, purchased in the East, for sale in Denver. As such, the "roadmeter" mentioned is an early odometer to record miles traveled. Percival sold his interest in the company in December 1860 to start his own freighting enterprise. Details can be read in

KT in the address below stands for "Kansas Territory."

Also, the "roadmeter" mentioned is an early odometer to record miles traveled.